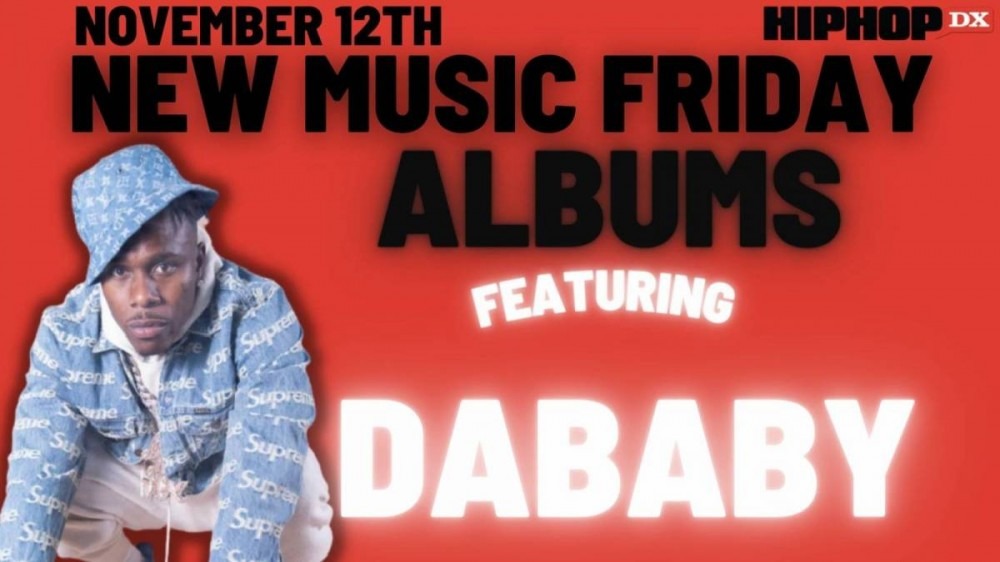 HipHopDX – Rap music fans may be on the verge of diving into one of the most diverse editions of HipHopDX’s New Music Friday feature this year.

There’s a great balance of projects from old school and new school artists floating around, such as a fresh mixtape from DaBaby, who Fat Joe dubbed this generation’s 2Pac, along with the new offering from former Slaughtergang lyricist Joell Ortiz.

Check out the full breakdown of releases from the week ending Friday (November 12), below.

DaBaby – Back On My Baby Jesus Shit Again

DaBaby appears to be back on his bullshit.

It seems working through his Rolling Loud controversy and the announcement of his Live Show Killa Tour has energized the DaBaby to the point of metamorphosis. However, instead of emerging in a new form, the Billion Dollar Baby Entertainment rapper is reprising his role as Baby Jesus for his latest six-song effort.

Opting to put the focus on his own lyricism, DaBaby’s Back On My Baby Jesus Shit is home to just two guest verses — one from “Killing The Rats” rapper Kodak Black and the other from Slaughter Gang top shotta 21 Savage.

Money Man is seemingly living up to the hype of his stage name with each of the financially meticulous moves he’s making in the music industry.

Having struck a chord with listeners across the world this year as an independent artist with his hit “LLC” single featuring Moneybagg Yo, Money Man broke the bank with the million-dollar advance he received in Bitcoin after inking a deal with EMPIRE earlier this week.

Taking full advantage of the moment he’s currently having, Money Man integrates his fascination with cryptocurrency and nuanced trap production on his 13-track Blockchain album.

As Brooklyn continues to develop into a hot spot for the burgeoning drill rap subgenre, veteran MC’s such as Joell Ortiz continue to leave their mark on the ever-changing landscape of music in the New York City borough.

Building on the release of his 2020 H.A.R.D. album, Joell Ortiz brought it back to the basics on his 13-track Autograph album, connecting with Queens super-producer Salaam Remi and underground beatsmith Apollo Brown and numerous other season composers for the record.

Joell also gets assistance from multiple formidable rap warriors such as Sheek Louch, CyHi The Prynce and KXNG Crooked.

Toronto rapper Smiley can vouch for just how life-changing a co-sign from the 6 God Drake is.

Ever since the 24-year-old caught the attention of Drizzy and his team with his unruly and menacing “Hit” banger in 2017, he’s managed to gain fans internationally in America and the UK and recently inked a deal with OVO Sound this year — celebrating with the release of his Certified Lover Boy-stamped “Over The Top” single.

The wait is over, the anticipated debut from R&B power duo Silk Sonic is here.

Considering the demand Grammy Award-winning vocalists Anderson .Paak and Bruno Mars caused with their popular “Skate” single and their inaugural “Leave the Door Open” hit which reached the No. 1 spot on the Billboard Hot 100, eager fans were dealt a devastating blow when the pair announced they were pushing the album back to the top of 2022 in their recent Rolling Stone cover issue.

However, after teasing an updated November release date, Silk Sonic comes through with their nine-song debut effort, An Evening With Silk Sonic, which includes guest appearances from Thundercat and Bootsy Collins.

If he isn’t already, 16-year-old Las Vegas-born rapper KA$HDAMI should be on your radar.

The “Reparations!” rapper has been stacking up wins all 2021 and released several notable collaborations in the process, including his fan-favorite “Cabo” single featuring DX 2021 Rising Star DDG and Bankroll Hayden.

Having made Republic Records his home, KA$HDAMI gets comfortable in his new deal with the release of his 11-track Hypernova album, home to his “Head$hot!” collaboration with Trippie Redd.

Kicking off 2021 with the release of his Trench Baby album, highlighted by his block-life-banger “61st to 64th,” Lil Zay Osama has maintained his momentum throughout the calendar year and recently announced his participation as main tour support for G Herbo’s 25 Tour for a string of 12-dates beginning Friday.

Warner Records rapper David Sabastian has pulled out all the stops for his debut release with the label.

Upon making his arrival known with his February “Revolutionary” single, the L.A. native David Sabastian delivered his polarizing anti-establishment epic “America On Fire.”

In addition to Saweetie, the 14-track project includes contributions from YG, Gupdad 4000 and Miguel, among others.