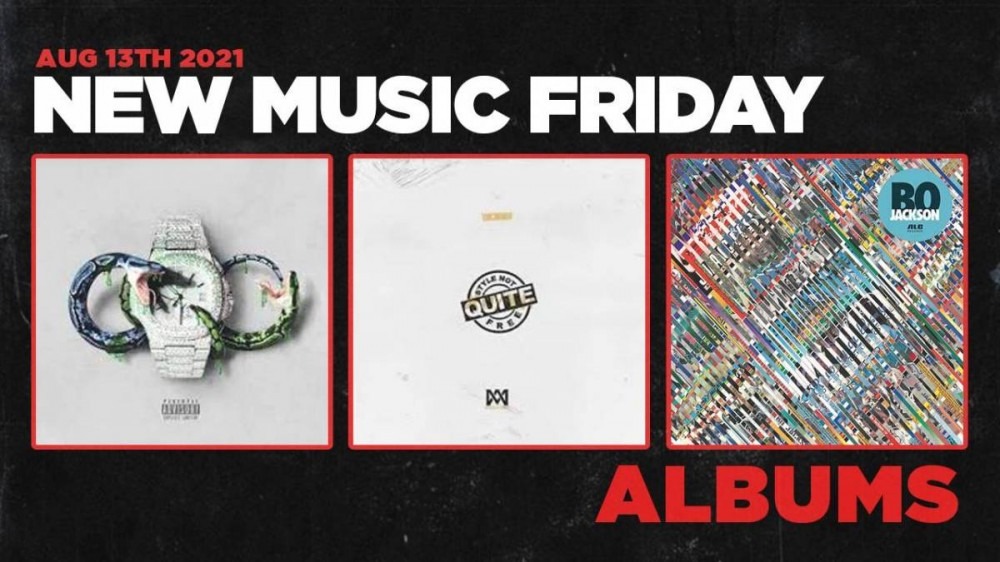 Heat waves continue to pummel the continental United States, so it’s essential to find the right music to bump while hiding from the scorching temperatures. Luckily, today’s edition of New Music Friday can serve as a needed distraction from the outside world, with new albums from the likes of Boldy James and Alchemist, Big K.R.I.T. and more.

The SossHouse wave continued this Friday with Pi’erre Bourne and Chavo’s Chavo’s World 2, a follow-up to their collaborative effort from last year.

The music just keeps coming, so keep reading for the complete coverage of new music released on the week ending on Friday (August 13), below.

Alchemist’s discography has undergone a serious facelift over the past two years. He’d already garnered countless hits since his career began in the early 1990s, but his current album run has reentered the Los Angeles-based producer into the Best Producer Alive discussion. His latest effort, Bo Jackson is with Boldy James, the Griselda affiliate and frequent Alc collaborator, and marks another massive success in both artists’ respective careers.

Boldy James had a dominating 2020, releasing three explosive albums in the form of The Price Of Tea In China, Manager on McNichols and The Versace Tape, and now the Detroit-born MC is starting his 2021 on a fantastic note. As James makes light work of Alchemist’s booming production, it’s tough to think of another rapper-producer duo operating on such a consistently high level.

Big K.R.I.T., the Gospel-informed MC from Mississippi first teased an incoming drop through an Instagram infomercial, urging his fans to text a phone number for a reward. After the creative marketing campaign, K.R.I.T. release A Style Not Quite Free, his first album since last year’s K.R.I.T. Wuz Here.

K.R.I.T. is somewhat of a Southern rap purist, takin g the lead from rap greats such as André 3000, Pimp C and Bun B, while inserting a healthy dose of instrumentals and tongue-twisting lyrical displays. That’s not to say he hasn’t adapted to the modern times, as demonstrated by new sounds and experimentation on A Style Not Quite Free.

YNW Melly’s life and career entered a rough period in 2019 when he was arrested and charged with two counts of first-degree murder. The “Suicidal” rapper kept his spirits high, releasing Melly vs. Melvin just months after his incarceration. The Florida-born crooner pled not guilty shortly after his charges and is still awaiting his trial following numerous delays from COVID-19.

Just A Matter Of Slime, Melly’s first release in over two years, has finally arrived with a loaded array of features from Lil Uzi Vert and Kodak Black to Young Thug and Future, carrying Melly’s melodic bars as the artist fights a potential life sentence.

One of rap’s most divisive and polarizing duos, $uicideboy$ has been putting their variation on Crunk music into the airwaves since 2014’s Kill Yourself Part I: The $uicide $aga, and their vision is now continued through their latest project, Long Term Effects of SUFFERING. Comprised of rappers and cousins Ruby da Cherry and $crim, $uicideboy$ latest is dark and perverse, as the pair explore themes of materialism, mental illness and more, all underscored by the chaotic trap production which has become their signature sound.

With over seven million monthly Spotify listeners at the time of writing, the New Orleans rap duo is an undeniable presence in Hip Hop, representing the most depraved corners of the genre.

Pi’erre Bourne’s fresh off the best solo album of his career thus far in The Life Of Pi’erre 4, and now he hopes to bring that same energy to Chavo’s World 2, with fellow SossHouse rapper Chavo. The two originally collaborated in 2016, but it was last year that their first official release surfaced. On Chavo’s World 2, the former SoundCloud producer sounds focused and mature, a freshly minted leader, ready to take his crew to the next level.

Chavo, who is originally from Boston, is coming off a similar high with “Michigan,” his single from last year which underwent serious virality on TikTok and beyond. Chavo’s World 2 is the rapper’s biggest look yet, and the stakes are high—luckily, it seems that he has solid mentorship under Bourne.

Following-up RARE Family (Reloaded) from earlier this year, Atlanta artist K CAMP just dropped FLOAT, a 15-track effort with features from PnB Rock, Trey Songz, Mooski and more. From the melodic crooning on the opening moments of “Forgiveness” to the rap-focused “Check My Stats,” the “Comfortable” artist comfortably tackles beats from producers such as OG Parker, Section 8 and more.

FLOAT’s lead single “Life Has Changed” with PnB Rock has been soundtracking the summer since its release in April, and now with FLOAT, CAMP is here to finish the season strong.

Honorable Mentions this week go to Iggy Azalea for End of an Era and Don and Von by Tanya Morgan.