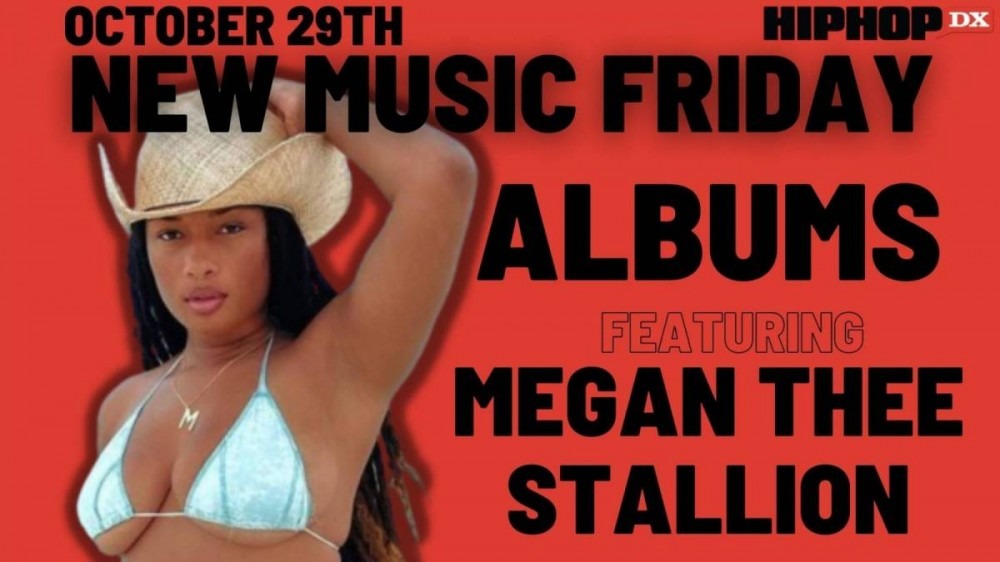 HipHopDX – With Halloween just days away, HipHopDX has gone door-to-door, virtually, in search of the trickiest treats to include in this week’s New Music Friday albums coverage.

On cue and in season, Megan Thee Stallion caps off a week filled with hell-raising costumes by delivering her spooky surprise project dedicated to her trick-or-treating hotties, to start.

Big Sean and Hit-Boy also get in on the action by catching fans off guard with their unexpected five-track release while IDK reloads his recent LP with fresh tracks and A$AP Rocky celebrates the 10th anniversary of his seminal 2010’s era mixtape with its official streaming debut.

Enjoy the full breakdown of releases from the week ending Friday (October 29), below.

Megan Thee Stallion – Something For The Hotties

Megan Thee Stallion is going all out in order to spoil the hotties with a Halloween to remember for years to come.

Beginning with the rollout of the news of her very own “Hotties Sauce” for Popeyes earlier this month, HotGirlMeg has seemingly become a trending topic week after week due to several internet-breaking stunts — highlighted by her cinematic, and devilish costumes which doubled as the album announcement.

Now, Tina Snow comes fully alive for her deafening 15-track Something For The Hotties album, powered by her promiscuous “Thot Shit” hit.

Big Sean & Hit-Boy – What You Expect

Big Sean and Hit-Boy are becoming the dynamic duo we always knew we needed.

Following the magic the pair created on Sean Don’s Magnum Opus Detroit 2 album, Hit-Boy proceeded to gas his frequent collaborator up on their anthemic “What A Life” visual single.

And with the buzz mounting after Big Sean killed his L.A. Leakers freestyle over Drake and Kanye West instrumentals, Hit and Sean are attempting to shatter the glass ceiling of What You Expect from them next with their quick-release, five-song EP.

Fans anxious for Curren$y and Jermaine Dupri’s upcoming collab project are getting an appetizer in the form of Spitta and Harry Fraud’s Regatta release.

On the heels of the release of his Still Stoned On Ocean 2 effort, Spitta and Harry Fraud link up for their third collaborative project in the last two years — which serves as the follow-up to their fan-favorite The Director’s Cut album.

IDK is quickly emerging as the next rap superstar to become a multi-disciplinary creative.

After launching his groundbreaking No Label Academy with Harvard’s Music Business program, IDK locked in a lucrative deal with Nike and went on to drop off the first iteration of his USEE4YOURSELF album.

With the addition of nine records, the PG County lyricist stamps the deluxe edition label on the project with the help of guest appearances from Trippie Redd, SiR, Royce Da 5’9 and more.

A$AP Rocky has had an undeniable run over the last decade.

For starters, he was one of the first artists of the 2010’s era to sign a major label deal off a mixtape after inking a $3 million deal with Polo Grounds Music/RCA Records in 2011. He also became a literal and figurative martyr for international justice in 2019 when he spent several weeks imprisoned in Sweden facing years of captivity following an altercation on the street.

Fast forward to 2021, A$AP Rocky is in a full-blown entanglement with Rihanna and his debut album Live.Love.A$AP has hit it’s ten-year milestone — hence its streaming debut, which Rocky remarked about fondly in a Heartfelt Instagram post.

Mick Jenkins – Elephant In The Room

Mick Jenkins is prepared to address the Elephant In The Room with his new offering.

Building on the brevity and earnest truths he brought fourth on his 2020 EP The Circus, Mick Jenkins carries a hefty load of lyrical jabs on his descriptively introspective, 12-record release.

Highlighted guest contributions manifest throughout the project in the form of vocals from R&B singer Serpentwithfeet and up-and-coming lyricist Greensllime, among others.

Though Ray Vaughn is the disruption of Top Dawg Entertainment, REASON is easily the rising star of the West Coast label.

And upon proving his lyrical chops on his robust debut album New Beginnings, REASON has returned with his concise, yet hard-hitting No More, No Less: Demo 1 EP.

Though the extended play collection features a mere three new songs, listeners can look forward to multiple guest cameos from artists such as Wale, Benny The Butcher and Isaiah Rashad.

Led by her moody and melodic “Honey” single produced by Grammy-nominated duo Nicky Davey, Amaal unravels the mystical lore of her sensational vocals on the seven-song release.