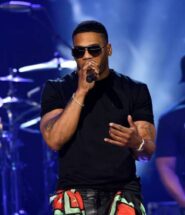 The ongoing trend in social media is the number of challenges that people have created over the years. The latest to sweep the world is the “Buss It Challenge,” where people begin the new craze in regular clothing and then switch to their best outfits and dance once the beat switch happens on Erica Banks’ new single “Buss It.”

Banks’ released the song in June 2020, but “Buss It” didn’t catch steam until recently, thanks to TikTok helping it go viral with the challenge. The song samples Nelly’s 2002 smash hit “Hot in Herre” and the Saint Louis native recently gave Banks and her song “Buss It” the biggest co-sign.

During an interview with the Zach Sang Show, Nelly gave his thoughts on Banks’ new single, saying he’s enjoying all the videos and the extra money he’s getting off of it.

“It’s dope, It’s dope man,” Nelly said when asked how he feels about the new challenge. “Keep doing it. Obviously, I had to clear the record but keep doing it, definitely. I see the numbers adding up for me it’s awesome [laughs].”

Nelly continued, “They reached out to me because I had to clear it a while ago. You can’t put nothing like that out without getting it cleared. When I heard the record, I was like, ‘Yo that’s jamming, that’s hard.’ I want to make sure the sister has a shot to try to better her life. I wouldn’t want to hold any of that up.”

The “Hot in Herre” rapper went on to say he’s glad that “Buss It” is working out for Banks and that she’s able to change her life with it. New artists are always looking for their big break, and Banks caught the biggest one, especially when the track came out last year.

A video recently showing Banks’ performing the song and partygoers standing still to the now-viral hit made its rounds on social media, and Banks had something to say about the growth she has seen in a matter of months. On Wednesday (January 13), Banks took to her Instagram Story to comment on it.

“It’s funny to see some of y’all who was talking that shit months ago, droppin that #BussItChallenge,” she wrote with laughing emojis on her Instagram Story. “Yall had a change of heart huh?”