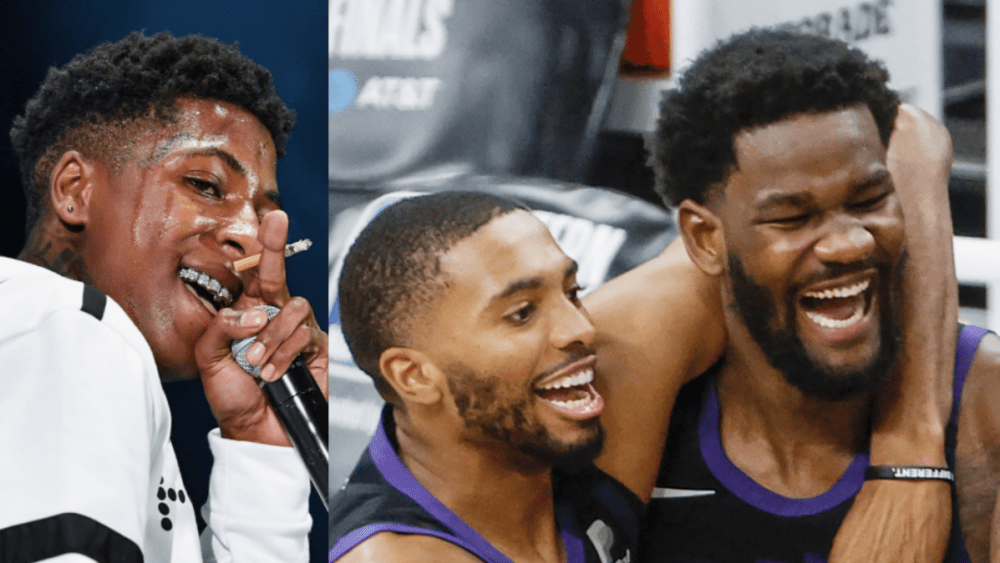 Phoenix, AZ – The Phoenix Suns might be adding a lot more NBA YoungBoy to their pregame playlist. On Wednesday night (March 2), Suns stars DeAndre Ayton and Mikal Bridges were caught on the Footprint Center’s jumbotron turning up to YoungBoy Never Broke Again’s “Nevada” 10 minutes before tip-off instead of warming up.

However, Ayton and Bridges’ antics didn’t distract them from the business at hand as Phoenix went on to blowout the visiting Portland Trail Blazers by 30 points.

The clip quickly went viral and fans began crediting YB with getting the boys hyped up and giving them an extra boost when throttling the undermanned Trail Blazers by a score of 120-90. Bridges and Ayton combined for 33 points in the victory.

An avid YoungBoy fan added on Twitter, “No wonder the Suns have the best record in the NBA.”

No wonder the Suns have the best record in the NBA #Youngboy pic.twitter.com/usODpbqEgg

There were a few people who didn’t enjoy the clip, though, including those that suited up on the other side of the beatdown — like new Trail Blazers forward Josh Hart.

“This would be so much funnier to me if we ain’t get 30 piece immediately after,” he joked on Twitter.

This would be so much funnier to me if we ain’t get 30 piece immediately after… https://t.co/6S2ra4wIow

We’ll see if the trend continues on Friday night (March 4) when the struggling New York Knicks come to the Valley for a battle with the Suns, who will once again be without their starting backcourt of Chris Paul and Devin Booker.

The Suns’ pregame playlist will have more YoungBoy Never Broke Again songs to choose from thanks to the Baton Rouge star’s new joint album with DaBaby, Better Than You album. The project boasts 12 songs and arrived on Friday (March 4).