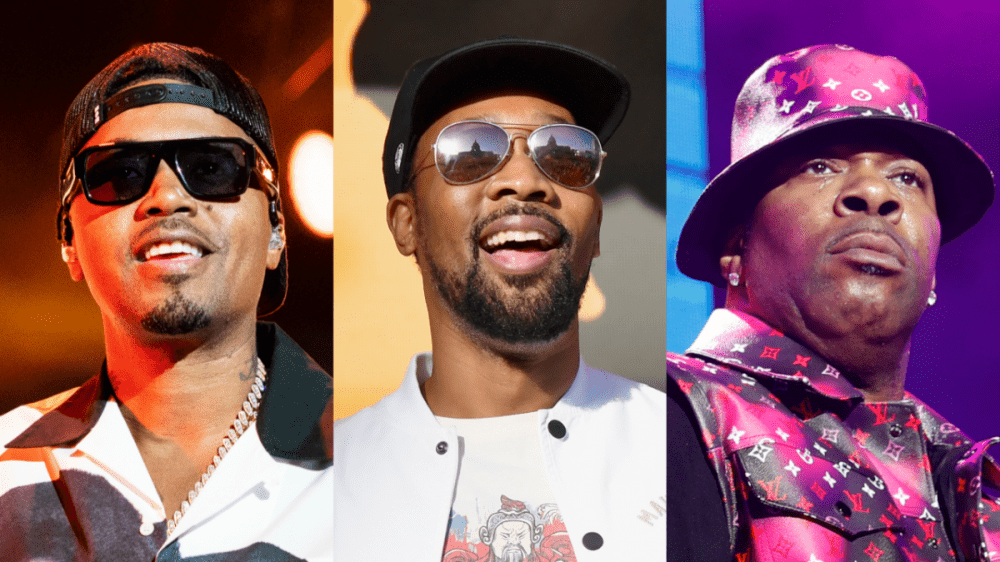 Maryland Heights, MO – Nas and Wu-Tang Clan brought a slice of the Rotten Apple to Middle America on Tuesday night (August 30) as their N.Y. State of Mind Tour got underway.

The Hip Hop luminaries kickstarted their co-headlining North American trek at the Hollywood Casino Amphitheatre in Maryland Heights, Missouri, where they were joined by fellow New York giant Busta Rhymes, who was announced as the tour’s special guest just a few days prior.

Rocking a camouflage outfit, matching bucket hat, shades, Timbs and an iced-out “N” chain, Nas took the Gateway City crowd on a journey through his decorated catalog, from early Illmatic cuts like “It Ain’t Hard to Tell,” “The World Is Yours” and, of course, “N.Y. State of Mind” to “If I Ruled the World,” “Hate Me Now” and “Made You Look.”

The stage featured a mock Statue of Liberty and giant screens broadcasting scenes of ’90s New York City, making the almost 1,000-mile trip back in time all the more immersive.

Wu-Tang Clan were not quite in full force for the opening date; RZA, Ghostface Killah, Raekwon, GZA, Inspectah Deck, Masta Killa, U-God and even Young Dirty Bastard — the son of the late ODB — all made the trip to the Show-Me State, but unfortunately Method Man was nowhere to be seen.

Nevertheless, the Clan transported fans to the slums of Shaolin, forming like Voltron to perform fan-favorites such as “C.R.E.A.M.,” “Bring Da Ruckus” and “Triumph,” as well as tracks from their respective solo catalogs. Nas returned to the stage to join Rae and Ghost for their Only Built 4 Cuban Linx… collaboration “Verbal Intercourse.”

Capping off the night was Busta Rhymes and his loyal sidekick Spliff Star, who provided a jolt of late-show energy with hits like “Put Your Hands Where My Eyes Could See,” “Break Ya Neck” and “Pass the Courvoisier Part II.”

“I want to make a toast,” Busta said while uncorking a bottle of champagne on stage. “Wu-Tang, Nas, Busta Rhymes — this is the first time this is happening in 30 years of our friendship, in 30 years of our brotherhood and in the last 30 years ever in fucking Hip Hop.

Next up, the N.Y. State of Mind Tour heads to Noblesville, Indiana on Thursday (September 1). The 25-date trek also swings through cities including Toronto, Atlanta and Houston and before wrapping up in Los Angeles on October 4.

Curiously, there is no New York date on the schedule, although there are shows in nearby New Jersey — one in Camden on September 9 followed by another in Newark on September 13.

Check out more footage from the opening night of Nas and Wu-Tang Clan’s N.Y. State of Mind Tour below.