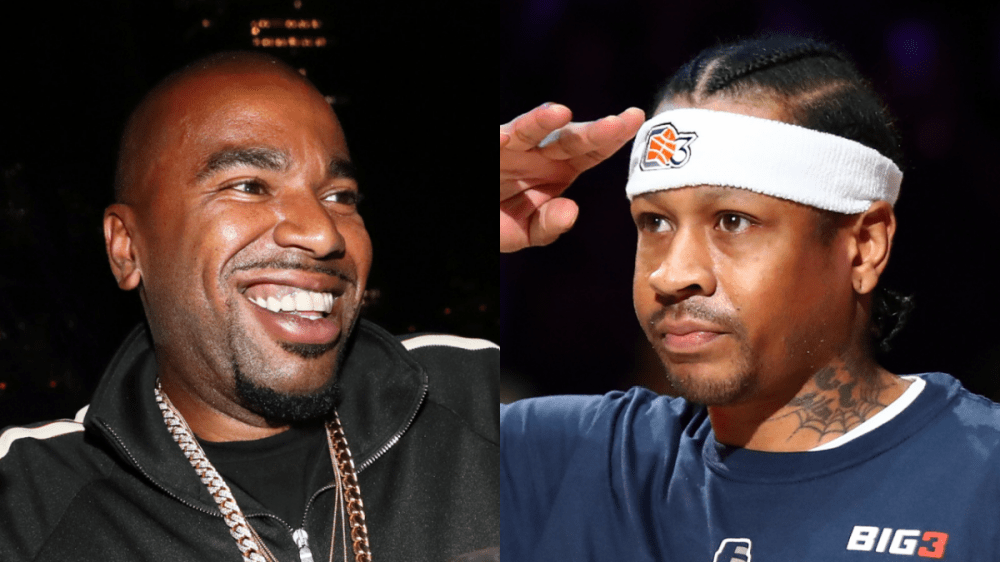 Miami, FL – N.O.R.E. is usually the one giving cultural icons their flowers on his Drink Champs podcast, but it was the Queens, New York native who was on the receiving end of the praise during a recent meeting with basketball legend Allen Iverson.

In a video posted to his Instagram on Sunday (December 26), N.O.R.E. is seen embracing A.I. outside of the Miami restaurant Carbone as the NBA Hall of Famer shows him love.

“Go out there and be cool how you be cool,” Iverson jokes, referencing N.O.R.E.’s line from the 2002 film Paid In Full.

“God almighty, man. I love you, dawg. You the best, man,” The Answer continues as he and the “Superthug” rapper share a hug. “You one of the heroes in my life.”

The always-affable N.O.R.E. responds in kind while persuading Allen Iverson to swing by Drink Champs.

“I LOVE @theofficialai3,” the rapper-turned-podcaster wrote as the caption to the video. “He has no idea how much I love him me and my nephew yalla hondro @yung_reallie we LOVE U A.I. salute yande!!!”

It appears N.O.R.E. and A.I.’s link-up happened last week as footage of their meeting surfaced online on December 21.

“That’s a Hall of Fame ring, but whose ring is it?” the Drink Champs host said in the clip while flexing an NBA ring, before panning his camera up to reveal Allen Iverson standing by his table. “We with A.I. and we not talking about artificial intelligence!”

N.O.R.E. further commemorated the Kodak moment by posting a photo of himself and the former NBA MVP on Instagram, writing, “When u meet the yalla at the yallla yande !!! @theofficialai3 salute my idol!!! And I put on the hall of fame ring!!!”

Given his legendary status not just in basketball but within Hip Hop — the thugged-out fashion, the on-court swagger, the Jadakiss collaborations and, of course, the part-time rap career — Allen Iverson has been a sought-after Drink Champs guest for some time.

In July 2020, N.O.R.E. hinted at securing an A.I. episode when he tweeted, “Just got off the phone wit @alleniverson think drink champs might take a road trip to Virgina and atl on the way Back!!!”

However, much like NBA defenses discovered, Iverson has proven to be a slippery character to lock down. Let’s hope this latest meeting between A.I. and N.O.R.E. gets the ball rolling.

Just got off the phone wit @alleniverson think drink champs might take a road trip to Virgina and atl on the way Back!!!