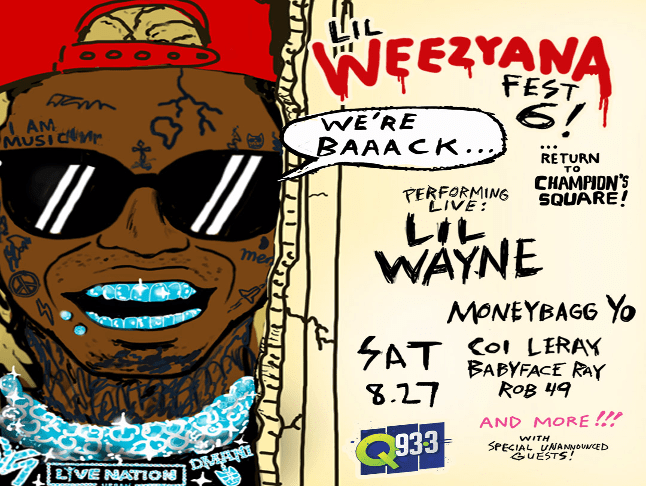 The sixth edition of Lil Wayne’s artist-curated festival, Lil WeezyAna Fest, will take place in his native New Orleans on August 27. The event is back at Champions Square this year for the first time in four years. This year’s one-day festival, which brings together some of the biggest musical acts, will remain distinctive and unpredictable.

“We’re glad to be back home! New Orleans birthed us, and we can travel and hit the stage anywhere in the world, but there’s no place like home! As always, we will be honoring the many lives lost in Hurricane Katrina as this year marks the 17th year anniversary. Wayne is excited to get back home as this one will be one you won’t want to miss!” states Mack Maine, President, Young Money Records.

“Lil Wayne is ubiquitous with New Orleans and Lil WeezyAna Fest is an incredible representation of the city’s vibrant and thriving music culture. In its 6th year, the festival has become a New Orleans tradition and Live Nation Urban is beyond ecstatic to bear witness to such an impactful event,” says Brandon Pankey, Vice President of Business Development & Operations at Live Nation Urban.

Lil Wayne has been a host of one of New Orleans, Louisiana’s most exciting events since 2015. Lil WeezyAna Fest has established itself as an annual homecoming for Wayne that honors the area’s musical heritage and serves as a platform for him to give back to the neighborhood. This year, $0.50 from each ticket purchased for the event will be given to programs supporting education for New Orleans young people.

Tickets will be available everywhere beginning Friday, July 15 at 10 am local time.