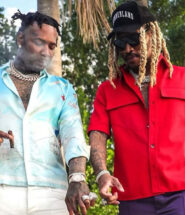 Moneybagg Yo and Future join forces on their new collaboration “Hard for the Next.”

Speaking with Apple Music, Moneybagg opened up about collaborating with Future on the track, which was originally titled “Patek.” “Then he was like this is yours bro. I was like man, this it bro,” he said. “Then I had laced it and when I laced it, I sent it back to him and he was like, ‘Bro, you know you got an ear for this shit. You got an ear for it, this it, this one of those ones.’ I was like, ‘Man you got to give me that. You can’t hold that.’”

“Hard for the Next” is set to appear on Moneybagg’s upcoming album Gangsta’s Pain, the follow-up to last year’s Time Served. “I got eight songs pain. And I got eight songs that are gangsta that’s dedicated to my core fans,” he said. “So it’s even if you don’t like the eight, you like the other eight. You don’t like that eight. You like that eight.”