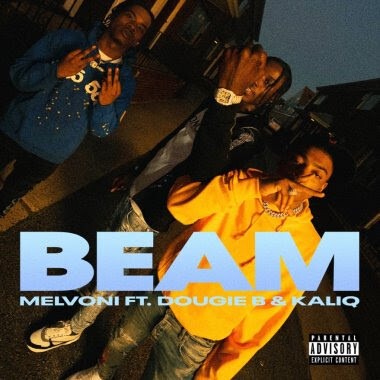 Brooklyn drill standout Melvoni joins forces with drill star Dougie B. and fellow Brooklyn standout KALIQ for the release of his new single, “BEAM,” which is now streaming. The fast-paced music video, featuring the trio of artists taking to the streets of their stomping grounds, is also available today.

Melvoni’s rise as one of New York City’s most promising young drill artists has seen a steady incline in the last couple of years, owed largely to his ability to create infectious anthems effortlessly, while still retaining the edge and serious lyrical content that characterizes his street appeal. On “BEAM,” this quality of the Brooklyn native shines brightly. Despite the ominous context of the song and its music video, Melvoni—still a teenager—makes you want to dance. Dougie B. and KALIQ complement the star-in-the-making seamlessly, maintaining the song’s fluent bounce despite their unique cadences.

This chemistry is tangible, courtesy of the “BEAM” video, which is equal parts storytelling and hype rally, as Melvoni’s lyrics weave a tale of tension that he and his entourage’s jubilant dance moves do well to distract from. This is the Brooklyn native’s specialty: songs that make you want to move but writing that makes you want to listen. It’s a major reason why since his breakthrough year in 2019, Melvoni’s bops, like “No Man’s Land” (recently heard in Bel-Air: Season1) and “Big Rocks,” have racked up tens-of-millions of streams and views. “No Man’s Land,” initially meant to be a collaboration with the late drill superstar and Brooklyn native Pop Smoke—an indicator of Melvoni’s ascent— is fast-approaching 10 million views on YouTube. His 2021 releases of “NY” “Get Money” ft. DDG + Tyla Yaweh gave fans an indicator of what’s to come and now “BEAM” is a clear evolution of that sound.

Dougie B’s appearance on “BEAM” is yet another indicator of Melvoni’s rise to prominence; the Bronx-bred rapper is only a few months removed from his own star turn: appearing beside Cardi B as a guest feature on Kay Flock’s remix to the drill anthem, “Shake It.”

Despite his youth, Melvoni’s feet are firmly planted at the forefront of the Brooklyn drill scene, and thus the new generation of Hip Hop stars. If his music and charisma continue to mesh this seamlessly, he stands to be “up-and-coming” for not much longer.