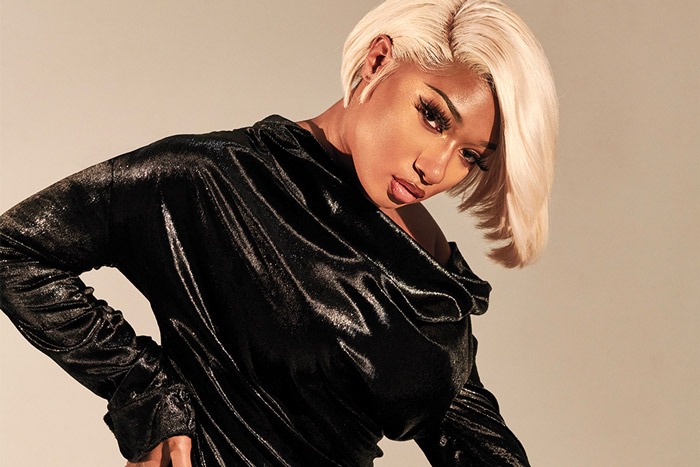 The year of Thee Stallion continues.

After topping the charts with her Beyoncé-assisted smash “Savage” and earning three MTV VMA nominations, Megan Thee Stallion celebrates her meteoric rise by gracing the cover of Variety‘s 2020 Power of Young Hollywood issue. In the magazine, the 25-year-old rapper opens up about her success and her highly-anticipated debut album.

But there was one topic that was off limits, her recent shooting involving Tory Lanez, which took place just nine days before the scheduled interview. The Houston hottie suffered multiple gunshot wounds to the feet during the incident, which she has called the “worst experience of my life.”

However, she remains in good spirits. “I’m not the type of person who can stay down for a long time,” said Meg. “I don’t like to be sad or keep myself in a dark place, because I know it could be the worst thing happening, but the pain and the bad things don’t last for long.”

Power of Young Hollywood: Megan Thee Stallion isn't slowing down or backing down, but she's ready to move on. In the early hours of July 12, Megan was injured in a shooting. “I was shot in both of my feet and had to get surgery to get the bullets taken out,” she says. Such incidents normally send a celebrity into hiding, but after nine days of tabloid frenzy, Megan was on the phone with Variety for a long-scheduled interview. She was cheerful, funny, forward-looking and optimistic, only hinting at the experience when asked how she’s doing. “I’m not the type of person who can stay down for a long time,” she says. “I don’t like to be sad or keep myself in a dark place, because I know it could be the worst thing happening, but the pain and the bad things don’t last for long.” At the link in bio, find out how Meg went from #HotGirlSummer to the hottest rapper right now. (📸: @orinary)

After releasing her Suga EP in March, she is now readying her full-length debut for release by the end of summer. The still-untitled project will introduce yet another alter ego, who she describes as “the leader of all of them, the boss,” and promises to show another layer to the Hot Girl, with lyrics addressing the Black Lives Matter movement.

“I feel like everything that’s going on right now, if it hasn’t moved you to speak out or try to make some type of difference, then something might be slightly wrong with you,” she said. “Even though I haven’t already come out with a song with that messaging, I definitely plan on it.”

In addition to balancing her busy career, Meg continues to pursue her education. She is working towards a bachelor’s degree in health administration at Texas Southern University, something which her “Hot Girl Summer” collaborator Nicki Minaj admires.

“One of my favorite things about Meg is her desire to further her education,” Nicki told Variety. “It’s so important for women to feel inspired to achieve goals outside of social media, where the focus is usually placed on their bodies or who they’re dating at the time. Women are more than just baby mamas, and we can continue to prove that by being goal oriented, bettering ourselves and being independent. Megan is the perfect example that we can have fun and be smart at the same time.”

Her famous friends also include fellow Houstonian Beyoncé. After meeting at Bey and JAY-Z’s New Year’s Eve party, the two collaborated on the chart-topping remix to “Savage.” “In the first five minutes of the conversation, I felt like I’ve been knowing her all my life,” said Megan. “She treated me like family, and now I feel like I am family. We talk all the time.”

And she’s only getting started. Meg was recently nominated for three MTV VMAs and is featured on Cardi B’s new single “WAP,” which drops Friday.