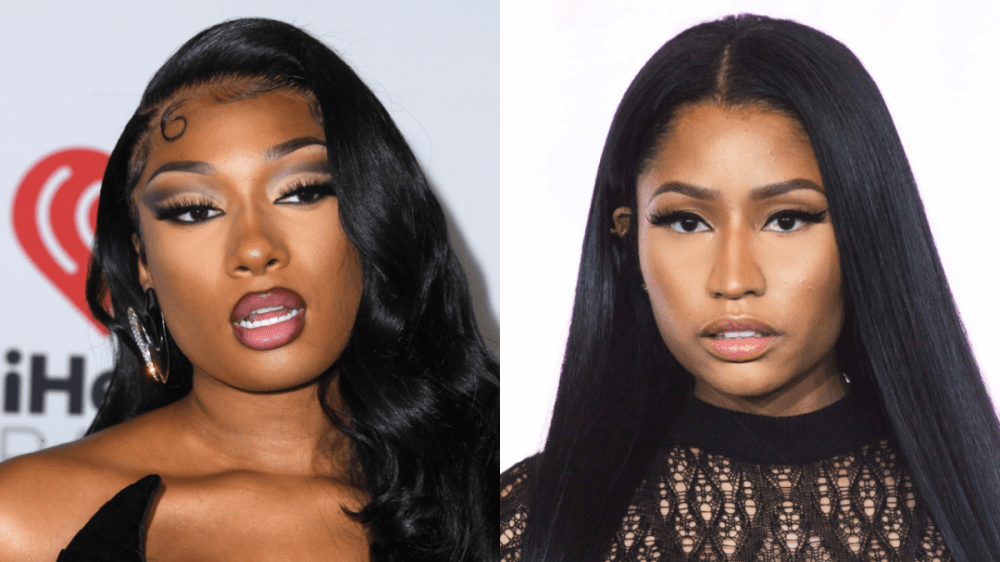 Megan Thee Stallion has denied she once told Nicki Minaj to get an abortion.

The Young Money superstar hosted a new episode of her Queen Radio show on Amazon’s Amp app dubbed “Tea Party” on Sunday night (September 11), where she spilled the tea about her rap rivals, among other topics.

At one point during the almost hour-long episode, Nicki claimed an unnamed individual suggested she terminate her pregnancy at the abortion clinic after declining their offer for an alcoholic drink.

“Imagine telling someone you didn’t want a drink… you know, because you were, at the time, possibly pregnant, because you were actively trying to have a baby,” she said. “Imagine that person saying, ‘Oh girl, you can go to the clinic!’”

She added: “Imagine posting photos that you’re pregnant… and the person doesn’t even like it or say congratulations. But then, when you post that Beyoncé sent you flowers congratulating you, the person then tries to attempt to send you flowers thinking that, ‘Oh, I could use this opportunity as I use everyone else. She’ll post that I sent her flowers.’

“I didn’t even let them shits in my muthafucking house.”

Some of those in Nicki Minaj’s fiercely loyal fanbase, the Barbz, pointed the finger at Megan Thee Stallion, with one person tweeting her: “@theestallion Nicki Minaj is accusing you of encouraging abortion & child endangerment w/ alcohol.. This isn’t something to stay quiet on.”

However, the Houston hottie comprehensively shut down the speculation by replying: “LIE.”

The back-and-forth between Megan and Nicki’s fans continued some more, with the Traumazine rapper expressing her bemusement at the allegations.

“No names were mentioned but u were first to respond? Oh baby the shoe fits,” another fan wrote, to which Megan replied: “So this person didn’t mention me?”

She added: “If someone @ you you can respond right or that don’t apply for every user on twitter? If someone directly @ my name …why do they be confused when I reply lol?”

Clearing things up for another fan, she wrote: “This person … as in the person who pressed the @ button… y’all not this crazy lol.”

So this person didn’t mention me? https://t.co/IHbiccwzbh

If someone @ you you can respond right or that don’t apply for every user on twitter? If someone directly @ my name …why do they be confused when I reply lol?

This person … as in the person who pressed the @ button… y’all not this crazy lol https://t.co/stIuEENTVO

While it’s unclear who made the abortion suggestion, the comment was certainly insensitive to Nicki Minaj’s past. In a 2014 interview with Rolling Stone, the Queen rapper opened up about having an abortion at just 16 years old after falling pregnant while dating her “first love” — an older guy from Queens, New York — when she was still in high school.

“I was a teenager. It was the hardest thing I’d ever gone through,” she admitted. Despite acknowledging it was the right thing to do at the time, she said the decision has “haunted me all my life.” She added: “It’d be contradictory if I said I wasn’t pro-choice. I wasn’t ready. I didn’t have anything to offer a child.”

As for her relationship with Megan Thee Stallion, their friendship has seemingly fizzled out since Nicki guested on her 2019 single “Hot Girl Summer.” Rumors suggest Megan’s “WAP” collaboration with Nicki’s fierce rival, Cardi B, is to blame, although neither artist has confirmed a feud.