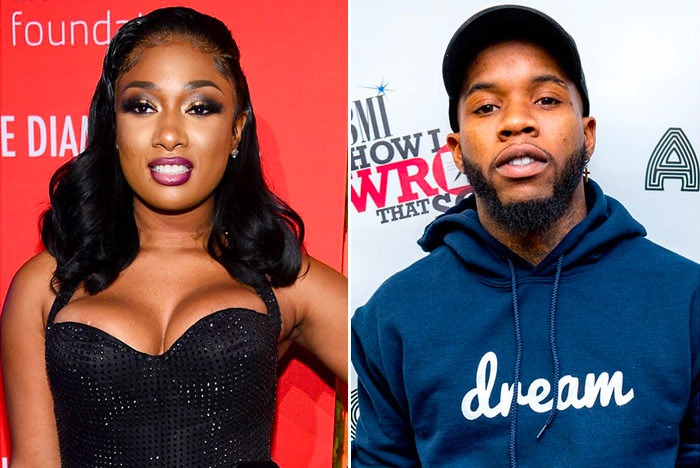 The “Savage” rapper took to Instagram Live on Thursday evening to accuse Tory Lanez of shooting her during the traumatic incident last month. While she has avoided naming him in the past, she put Tory on blast while addressing the people who have tried to discredit her and accuse her of lying about the shooting.

She then confirmed what many had suspected, that Tory was the trigger man. “Yes, this ni**a Tory shot me. You shot me. And you got your publicist and your people going to these blogs lying and shit. Stop lying. Why lie? I don’t understand.”

Meg reveals that they had an explosive argument in the car before Tory allegedly pulled out a gun and shot her as she was walking away. “Everybody in the car arguing. I’m in the front seat, this ni**a in the back seat. I get out the car. I’m done arguing, I don’t wanna argue no more. I get out, I’m walking away, this ni**a, from out the back seat of the car, starts shooting me. You shot me! I ain’t get cut by no glass, but let me tell you when they sayin’ that.”

She originally told the cops that she cut her feet on glass because she feared for her life. “The police are literally killing Black people for no motherfu**ing reason. As soon as the police tell us all: ‘Get out the motherfu**in’ car,’ the police is really aggressive. You think I’m ’bout to tell the police that we ni**as, us Black people, got a gun in the car? You want me to tell the laws that we got a gun in the car, so they can shoot all of us up? I’m scared.”

She avoided speaking with the police to protect herself and her friends. “I didn’t tell the police nothin’ because I didn’t want us to get in no more trouble than we already about to get in.”

After being detained, she was released while the other three passengers, including Tory, were taken into custody. Meg had X-rays taken on her feet to examine the wounds, which revealed bullets and bullet fragments. “I’m thinking the doctors is the police, so I’m still tryna not tell them. I’m scared. I’ve never been shot before. I don’t have to lie about that.”

Megan Thee Stallion speaks out and shares an image of her gunshot wounds after people accused her of lying about being shot:

“Y’all like to hear bad news before good news, a lie spreads quicker than the truth, and y’all really be believing the shit YALL make up…” ❤️ pic.twitter.com/lkGhxQeBo5

She also had a message for the people who continue to call her a liar. “Stop tryna come on the internet actin’ like a Black woman, a grown-ass Black woman, really got any reason to be lying on another grown-ass Black man with all the shit fu**ed up going on in the world right now.”

She said she tried to avoid implicating Tory in the crime. “If you really wanna tell the motherfu**in’ truth, I tried to save this ni**a, even though he shot me. I tried to spare him. And ya’ll motherfu**ers is not sparing me. That’s crazy. That’s fu**ed up.”

Meg continued, “He not in jail because I didn’t tell the laws what happened as soon as it happened and I should have. I’m smart. I didn’t have to spare that ni**a. I don’t have to spare nobody, but I did. … Ask that ni**a why he not sayin’ nothing. What the f**k he gon’ get on her and say? ‘Yeah, I shot her.’ Tell ’em why you shot me. No reason.”

Tory has remained silent since the July 12 shooting, but Megan says it’s because he’s afraid to tell the truth about what happened. “You scared to come tell everybody that you shot me and you got your whole motherfu**in’ team on the internet lyin’, tryna cover your motherfu**ing ass and I’m tired of it. Stop doing that shit. Stop draggin’ me.”