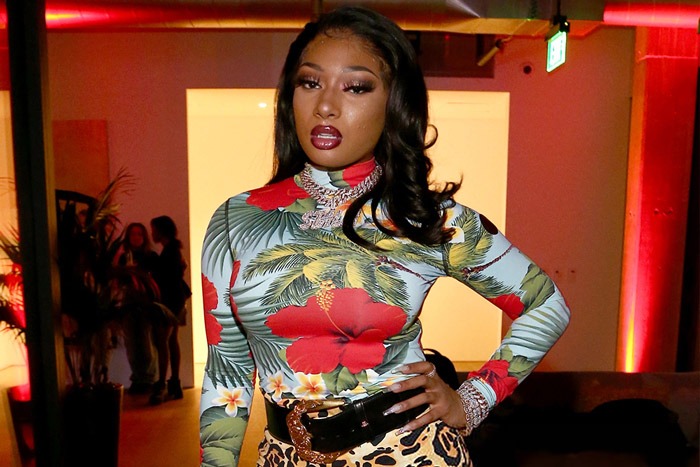 Fresh off the release of her new single “B.I.T.C.H.,” the Houston hottie is revealing some of the big names on her highly-anticipated debut album Suga. In an interview with Apple Music’s Beats 1, Meg said the album will feature collaborations with SZA, Juicy J, and Pharrell.

“My friend SZA, she pulled up on me in the studio, because we have a song that’s gonna be on my album too and it was so fire making that song with her,” she said. “Juicy J produced it. We know I love Juicy J. So yeah, we got a lot of bangers on that album.”

She was also recently in the studio with Pharrell for four days cooking up some hits. “I’m working on my album and I definitely just really appreciate good music. And Pharrell is just somebody that you know knows good music,” she said. “We locked in the studio for about four days and we got some fire.”

The album, which follows her mixtapes Fever and Tina Snow, is named after her newest alter ego Suga (“She’s besties with Tina Snow”) and is also said to feature Kehlani, according to a press release.

On Friday, Meg released the first track off the album, “B.I.T.C.H.,” which samples Tupac’s “Ratha Be Ya Ni**a.” “I had to respect the legends,” she said. “I had just finished doing a show. I cannot remember what state I was in, but I had left my show and I was about to take a shower. And I had hit my A&R and I’m like, ‘I wanna remake ‘Ni**a’ by Tupac.’ So he literally sent the beat like, the next day. I wrote a little bit of it on the plane and then I wrote the rest of it in my next hotel room in the next state. And boom, I literally just went to record it in Vegas like the next week after that.”

Megan also recently collaborated with Normani on “Diamonds” off the Birds of Prey soundtrack. “She’s bomb and she’s another Houston girl. So I definitely was like, ‘We gotta get the two Texas girls on this song.'”