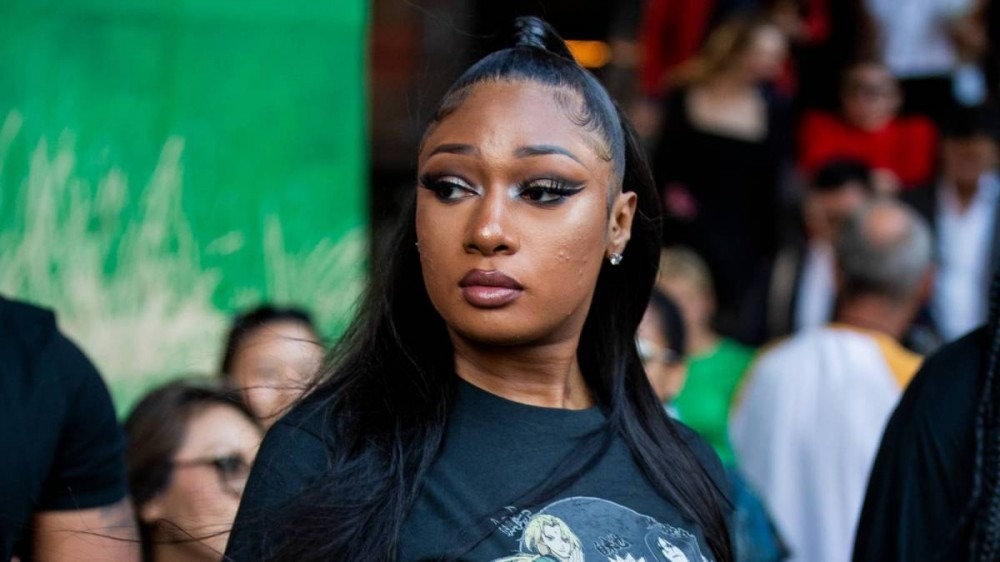 New York, NY – Megan Thee Stallion sat down with CBS Mornings on Monday (April 25) to discuss the July 2020 shooting incident involving Tory Lanez. As previously teased, Megan recounted that night and claimed after Lanez allegedly squeezed the trigger, he was immediately apologetic and offered her an insane amount of money to remain silent.

“I was really scared ‘cause I had never been shot at before,” she said. “And I looked down at my feet, ‘cause I wasn’t even – the adrenaline is pumping so hard, I’m not sure if he hit me. Like, I feel it, but I don’t understand what’s happening. So, I looked down at my feet. I’m like, ‘Oh, my God.’ Like, I’m really bleeding. So, I drop down, and I crawl in somebody’s driveway. Like, I can’t believe he shot me.

“He’s apologizing, like, ‘I’m so sorry. Please don’t tell nobody. I’ll give y’all a million dollars if y’all don’t say nothing.’ And I’m like, ‘What are you talking about?’ Like, ‘Why are you offering me money right now?’ Help me. Like, and if you’re sorry, just help me.”

Rapper @theestallion says she knew she could rap at 7 years old — and by the time she got to college, "Megan Thee Stallion” became her identity.

She tells @GayleKing about her parents’ impact on her life, becoming a megastar and the night she was allegedly shot by Tory Lanez. pic.twitter.com/oEmclNdVDe

As Megan Thee Stallion continued, she recalled what happened when police arrived on the scene.

“I don’t remember everything they said to me, but I remember them asking me, ‘What’s happening? What happened to you?’” she said. “And I didn’t want them to kill any of us or shoot any of us. So, I just said, ‘I stepped on glass,’ because I didn’t want —”

King interjected, “But why did you say that? Why didn’t you say ‘He shot me?’” to which Megan replied, “I didn’t – for some reason, I was just trying to protect all of us because I didn’t want them to kill us. Like, even though this person just did this to me, my first reaction still was to try to save us. I didn’t want to see anybody die.

.@theestallion shares her story of the 2020 incident when she was shot in her feet, allegedly by Tory Lanez.

She says she initially told police she stepped on glass, because she feared for her life: “I was just trying to protect all of us because I didn't want them to kill us.” pic.twitter.com/qd4MJ1yN2w

Megan Thee Stallion has experienced plenty of online bullying since the shooting and admitted to King her anxiety has grown exponentially in the time since.

“I feel like my anxiety is worse,” she said. “I feel like my relationship with people is – has gotten very cold ‘cause I’m not as trusting as I used to be. Like, I got this wall and I don’t want to make any friends. And I’m trying to be as nice as I can to everybody. My – I don’t even prob – new people, I probably won’t even hold a conversation longer than 30 minutes ‘cause I feel like every time I’m talking, I’m on the verge of tears and I don’t want to have to explain to strangers why I’m crying.”

Tory Lanez was recently remanded back to jail after a judge determined he’d violated a protection order put in place, however he quickly posted $350,000 bail and was released. Both Megan Thee Stallion and Tory Lanez are expected back in court on August 17.

Elsewhere in the interview, Megan opened about about her parents’ impact, although she lost her mother to cancer in 2019.

“They were my best friends,” she said. “It was only the three of us all the time … Like, when I went to school, I felt like it was a little different with me interacting with other kids. So, like, they would kind of pick on me a little bit. Like, I was so tall already. They just really let me know, like, you can’t ever let somebody else’s insecurities make you insecure.”