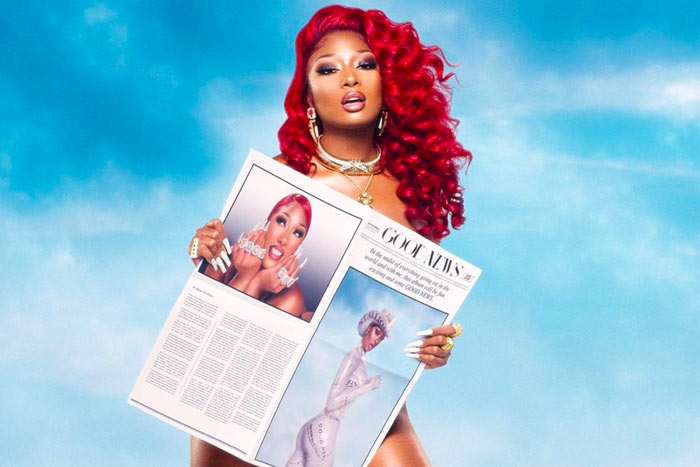 Amid a tumultuous year, Megan Thee Stallion is ready to lift spirits with her debut album. The long-awaited project is set to arrive Nov. 20. Today, she revealed the cover art, which features a naked Megan holding a newspaper over her body.

“THROUGH SUCH A ROUGH YEAR I FELT LIKE WE COULD ALL USE A LIL GOOD NEWS,” said the Houston rapper. “MY OFFICIAL ALBUM ‘GOOD NEWS’ DROPS NOV 20TH !”

THROUGH SUCH A ROUGH YEAR I FELT LIKE WE COULD ALL USE A LIL GOOD NEWS 📰 MY OFFICIAL ALBUM “GOOD NEWS” DROPS NOV 20TH ! Pre save tonight @ midnight #GOODNEWSMEGAN pic.twitter.com/7mDZLP1cQ6

The album, which will be available to pre-order tonight, has already spawned the single “Don’t Stop” with Young Thug, which was preceded by the Eazy E-sampled “Girls in the Hood.”

In March, she released her Suga EP. Good News promises to show another layer to the Hot Girl, with lyrics addressing the current social and political climate.

“I feel like everything that’s going on right now, if it hasn’t moved you to speak out or try to make some type of difference, then something might be slightly wrong with you,” she told Variety. “Even though I haven’t already come out with a song with that messaging, I definitely plan on it.”

Megan is also set to perform at the American Music Awards on Nov. 22, where she will debut a brand new track.