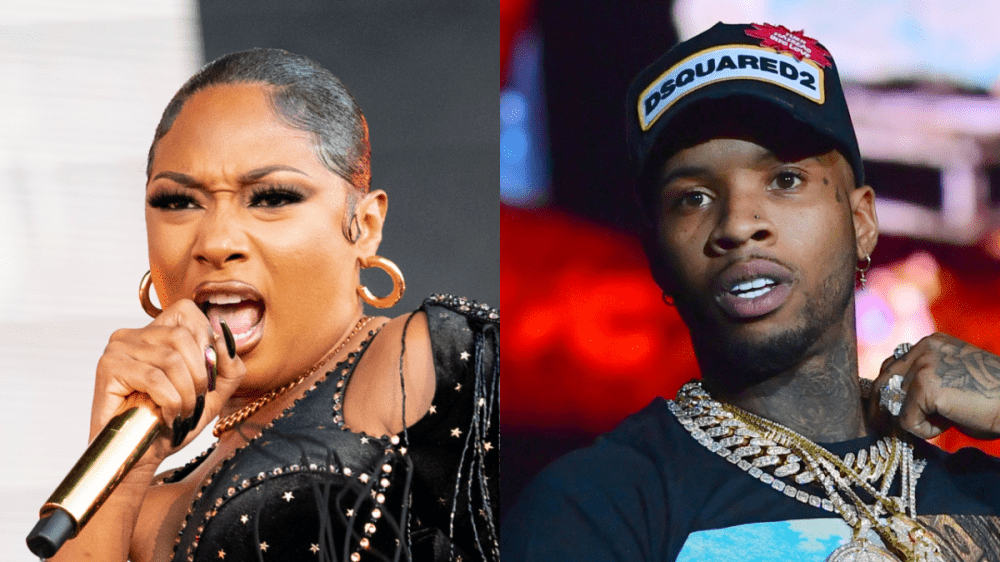 Megan Thee Stallion’s new album Traumazine arrived on Friday (August 12), and the project finds her touching on various topics — including the ongoing Tory Lanez shooting case and her mother’s death.

On the fiery “Who Me” — a collaboration with the currently incarcerated Pooh Shiesty, who is serving five years in prison on a firearm conspiracy charge — the Houston rapper addresses the highly-publicized shooting, reasserting her claim that Tory was the triggerman in not-so-subtle fashion.

“I feel like Biggie, who shot you?/But everybody know who shot me, bitch,” she raps over the hard-hitting production from KTOE and Taz Taylor, referencing The Notorious B.I.G.’s provocative 1995 song “Who Shot Ya?”

Megan Thee Stallion has accused Tory Lanez of shooting her in both feet in July 2020. The incident allegedly took place during an argument while the pair — along with Megan’s former friend Kelsey Nicole — were leaving a party at Kylie Jenner’s house in the Hollywood Hills.

Tory has been charged with assault with a semiautomatic handgun and carrying a concealed, loaded and unregistered firearm in a vehicle. If convicted, he faces a maximum sentence of 22 years and eight months in prison. The case is set to go to trial on September 14.

Megan previously addressed the shooting on “Shots Fired,” the intro track from her debut album Good News, which dropped in November 2020. That song also borrowed from Biggie’s “Who Shot Ya?”

Elsewhere on Traumazine, Megan Thee Stallion opens up about the death of her mother, Holly Thomas, who passed away due to a brain tumour in March 2019.

“If I could write a letter to Heaven/I would tell my mama that I shoulda been listenin’/And I would tell her sorry that I really been wildin’/And ask her to forgive me, ’cause I really been tryin,’” she raps on “Anxiety,” one of her most vulnerable songs to date.

Her mother’s death also fuels the very next song, “Flip Flop,” on which she admits, “Behind this smile, I’m fightin’ these tears/’Cause a bitch be sad as fuck/Ever since my mama died, 2019/I don’t really know who I can trust.”

She adds: “If your mama and daddy still walkin’ this Earth/Then you probably ain’t feelin’ my pain.”

While the 27-year-old continues to wrestle with grief, it hasn’t stopped her from achieving success, both inside and outside of music. In December 2021, Megan graduated from the College of Pharmacy & Health Sciences at Texas Southern University and credited her mother and grandmother for inspiring her.

“I want to get my degree because I really want my mom to be proud,” she told PEOPLE in June 2020. “I want my big mama to be proud. She saw me going to school before she passed.

“My grandmother that’s still alive used to be a teacher, so she’s on my butt about finishing school. I’m doing it for me, but I’m also doing it for the women in my family who made me who I am today.”