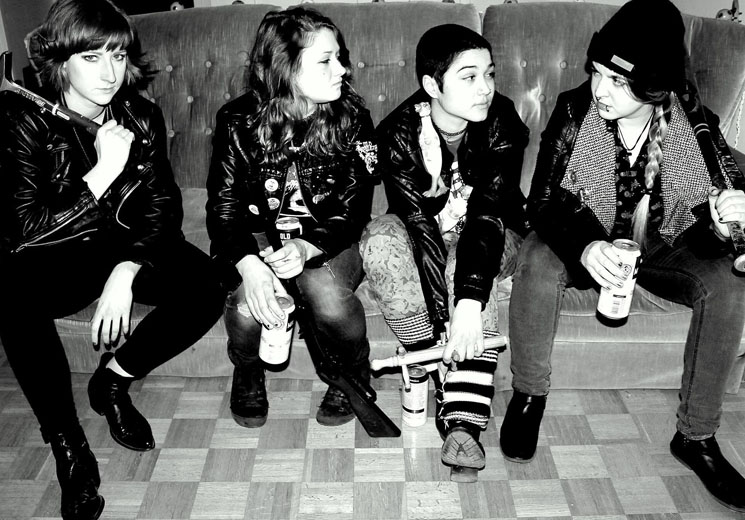 To get what Toronto rockers the Nude Dogs are all about, you don't have to look much further than their name, which vocalist/guitarist Kali-Ann Butala describes as "bitches baring it all." Filled with punk speed, gritty vocals and a riot grrrl attitude, the rising Toronto quartet have quickly earned a fierce following since forming in 2014. Their string releases, including 2017's Doll Creatures the Valley EP, and ferocious live show have earned them a strong following, with fans including Daniel Lanois and Metric's Emily Haines.

With the band's debut album on the horizon, we spoke with Butala to learn about the band's past, present and future.

The Nude Dogs were formed after Butala moved to Toronto from the Northwest Territories.

Several years ago, Butala moved south from the Northwest Territories in pursuit more opportunities in music, part which was driven by her desire to make music with women her own age. "I came to Toronto] to play music, and I wanted to start an all-girl rock band," she explains. "I had never played with any girls 'cause I grew up in a place where there were no other female musicians my age to play with, so I basically played with older dudes and I was like, 'I wanna find some chicks to play with.' Just to try something different, basically."

"I feel like it's been a trek. It's been a whirlwind adjustment," Butala says. "I grew up in the middle nowhere, so when I came to Toronto, it was like, 'What the hell?' But I've worked really hard and I feel pretty proud where I am right now."

In discussing her move to Toronto, Butala mentioned the support she and her band have found in other local rock bands: "We have a lot really good friends in bands, like Kaleidoscope Horse, Hot Garbage and] Lush Buffalo are all really good friends ours and we all hang out all the time.

They wear their influences on their sleeve — literally.

According to Butala, the band's influences include "a lot '70s Californian punk. Everybody has different influences. We all like Fugazi and Gang Four."

The band's chemistry is just as palpable f-stage.

"We have a really interesting relationship between all four us, because we hang out all the time. We're inseparable. We just love each other so much, it's disgusting, really," says Butala with a laugh. "I couldn't have asked to work with better people. Aside from being all females, they're just great musicians and great people. It's been really amazing."

As the band continue to grow in size and popularity, the members continue to enjoy it more than ever. "We're all just really happy when we're playing shows together. It doesn't feel like a job or anything," says Butala. "It's not always easier, it takes work, but it's worth working through if you care about people a lot, if you care about this project, if you care about what you're doing, we're work through whatever we have to as friends and coworkers."

The band just wanna "fuck shit up" while they can.

As they continue to release material, the Nude Dogs are honing in on a more refined sound, but one that still retains their gritty edge. "The first EP we put out, we took a bunch different songs that all had different vibes, an idea different kinds songs we could make. This upcoming EP] is more heavy and more party-oriented. We're calling it Party Bangers, Vol. 1."

In describing the band's honed-in sound, Butala sums up the group's MO, which is "to rock out and have fun and make people fuck shit up. It gets boring just playing acoustic guitar and singing. While we're all young, we wanna smash it out until we can't anymore."