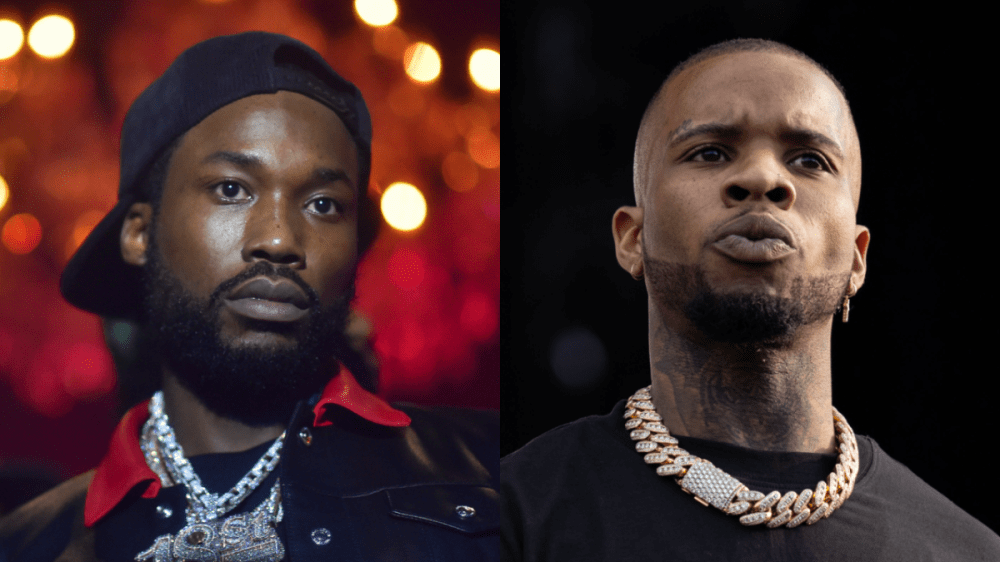 Philadelphia, PA – Meek Mill may be celebrating becoming the first rapper to receive a Nelson Mandela Foundation “Changemaker” Humanitarian Award for his criminal justice reform work, but he’s still got smoke for his opps.

As he showed off his prestigious award on Instagram on Thursday (August 12), the Philly rapper got involved in a heated exchange with Tory Lanez, who initially jumped into the comments section to correct Meek’s spelling.

“Blessings..,” read Meek’s caption. “I got ‘the Nelson Mandela humanitarian award’ Thankyou Rip to the great Nelson Mandela. ‘I ain’t grow up playing ball I had a smith & western* because where I’m from it’s very hard to turn 27’ #survivors.”

While the likes of Slim Thug, Tierra Whack and former NBA champion Stephen Jackson congratulated Meek on his award, Tory decided to nitpick Meek’s spelling of the weapons manufacturer by commenting, “Smith & Wesson*.”

In response, Meek wrote, “It’s called ‘meek flow’ say congrats or something weirdo lol.” To which Tory replied, “It wasn’t that deep … just ain’t want u to look dumb . Congrats tho bozo.”

The exchange then took a more confrontational tone as Meek Mill straight up told the Toronto rapper, “I don’t fuck wit you right now.”

“It’s kinda of deep you tryna help me wit my spelling and you know for a fact I don’t fuck wit you right now,” Meek clapped back. “If y’all Guys really rich why y’all acting like we cool on the net And you know we not do you … and stay out of street business when we talking about them blowers.”

It’s unclear where the tension between Meek Mill and Tory Lanez stems from exactly. Some fans have pointed to Tory’s recent “When It’s Dark” freestyle, which was primarily aimed at fellow Philly MC Cassidy, yet finds the Toronto rapper adopting a Meek-like flow without remorse. “I’ll steal a n-gga’s flow and what?” he taunted.

In 2019, there was speculation that Tory Lanez had poached Harlem MC Melii from Meek Mill’s Dream Chasers label. However, in an interview with Genius at the time, Tory clarified there was no bad blood between him and Meek.

“That’s my dog,” he said. “I never had an issue with Meek. We got on the phone and we spoke about what we spoke about. And once we spoke, it was done. It was never a thing like that. I think the world be thinking more into it than it is.”

In the past, Meek Mill and Tory Lanez have collaborated on songs such as “Litty,” “Lord Knows” and the now ironically-titled “Fuckin’ Wit Me.” Both rappers found themselves in Drake’s crosshairs on his 2016 diss track “Summer Sixteen.”