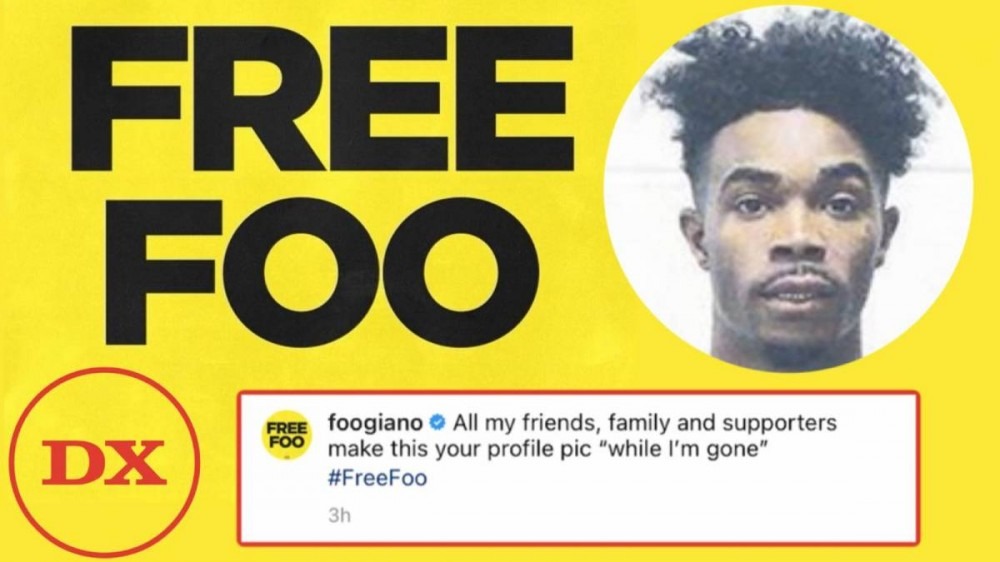 Greensboro, GA – It appears Gucci Mane’s 1017 Records artist Foogiano will have to put the pause on his come up indefinitely after the Gutta Baby rapper seemingly confirmed he’ll spend the next few years in a prison cell as a result of his legal woes.

Back in March, Foogiano was arrested in Memphis when he became a “Fugitive from justice” in the state of Georgia for burning off an ankle monitor he had be given after he posted his own $50,000 bail following a previous arrest in December for possession of a firearm by a convicted felon.

At the time, Foogiano, who at the time of his arrest was serving a probation sentence in connection with a 2015 burglary conviction, apparently torched the ankle monitor a Georgia judge required Foo to wear as apart of his bail requirements and threw the tracker out on the side of a highway in Barrow County.

AllHipHop reports music executive and Authentic Empire founder Boomman revealed Foogiano has received a five-year prison sentence in the county in which he was a fugitive — even though new circumstantial evidence has come for that could possibly free the Greensboro native.

“Green County Just Gave @FoogianoDaMayor 5 years for cutting an ankle monitor for a gun charge that wasn’t his and was claimed by some one else this is beyond crazy,” he wrote in the tweet. “We have to do something about
this!”

Green County Just Gave @FoogianoDaMayor 5 years for cutting an ankle monitor for a gun charge that wasn’t his and was claimed by some one else this is beyond crazy 😥 we have to do something about this!

“Free foogiano ….. don’t try to kill that man whole career about tryna protect his self years ago,” Meek fired off in the tweet.

Free foogiano ….. don’t try to kill that man whole career about tryna protect his self years ago!

Foogiano himself also confirmed his prolonged confinement in a pair of cryptic Instagram posts on Monday, (May 3).

In the first post, featuring a photo of his children, he thanked his fans for the love while also promising his supporters for new material.

“Appreciate all the love and support The Mayor will be back before y’all know it #FreeFoo New Music coming soon too,” he wrote in the post caption.

The second post featured Foogiano’s calling card to freedom in a loud yellow and black color scheme, along with a brief message and call to action for his ride-or-die fans.

“All my friends, family and supporters make this your profile pic “while I’m gone”,” Foogiano wrote in the post caption stamped with the hashtag #FreeFoo.

Back in July 2020, Foogiano’s South Carolina concert erupted in gunfire, leaving two people dead and resulting in a wrongful death lawsuit targeting Gucci Mane and Foo — alleging the rappers and their entourages were negligent and allowed into the venue without being searched, which allowed “dangerous persons” inside of the club with “deadly weapons.”

Foogiano’s partner Renni Rucci also shared a message about her literal partner-in-crime, taking a moment to reminisce in the time they shared whilst briefly building their whirlwind romance last year.

“You know what it is wit me! I got us. #freefoo these videos made me smile because the night he made this song about me I was in the next room making one about him. We was like two lil kids in love for the first time and it’s still that way…” Renni Rucci wrote in the caption signed with a melting heart emoji.