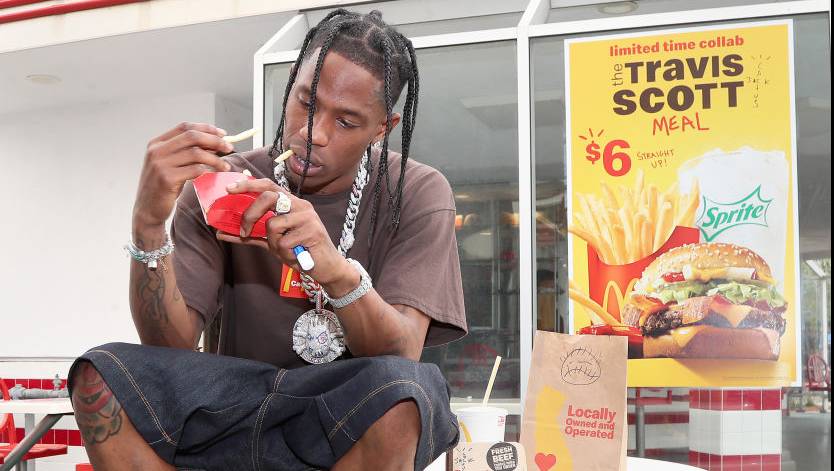 There are some hefty allegations being thrown at McDonald’s. In a new report from Vice, the fast-food giant is being accused of using both the Travis Scott and J Balvin value meal collaborations to distract from two racial discrimination lawsuits the company is currently facing.

Scott’s highly sought after “signature” combo meal — a Quarter Pounder with bacon, fries with barbecue sauce and a Sprite — was announced in early September, the same month one of the lawsuits was filed (the first was filed in January).

can I have a fry @JBALVIN? pic.twitter.com/oLDRpSfE9M

Historians Marcia Chatelain and Chin Jou, who have deeply explored McDonald’s “complicated relationship” with race in America, believe the timing is “convenient at best.”

Jou, a senior lecturer in American history at the University of Sydney and author of Supersizing Urban America: How Inner Cities Got Fast Food With Government Help, says Mickey D’s shouldn’t be receiving the influx of support from Black consumers.

“McDonald’s should be in the doghouse when it comes to African Americans right now,” she said. “This Travis Scott juggernaut has been so successful at obfuscating other McDonald’s-related news items.”

makes you wonder: does Cactus Jack say “I sent me” when he orders?

The first lawsuit was filed by two former executives at McDonald’s who claim the company “conducted a ruthless purge” of its Black leaders while creating a “hostile and abusive work environment” for Black executives and franchise owners. In 2014, the number of Black employees in upper-level positions at McDonald’s was at 42 percent but dropped to just seven in 2019, according to the court docs. Plaintiffs Vicki Guster-Hines and Domineca Neal believe they were demoted from their roles as senior vice presidents in 2018 because of their race.

The second lawsuit was filed by a group of 52 Black franchise owners who claim the fast-food giant subjected them to “systematic and covert racial discrimination” over multiple decades. They say McDonald’s forced them into opening locations in “low-income, high-crime areas, where sales were lower than the nationwide average, operating costs were higher, and employee turnover was rampant.” They also alleged Black franchisees were “given less financial support and harsher internal reviews than their white counterparts” and if they complained, would face retaliation.

McDonald’s has adamantly denied all allegations in both suits and is seemingly doing damage control. In June, they released a video via Twitter condemning racism and police brutality.

They were one of us:

Professor of history and African American studies at Georgetown University and author of Franchise: The Golden Arches in Black America Chatelain suggests there’s a correlation to the curiously timed Scott collaboration.

“[I] wonder if the decision to go forward with this collaboration was a response to not only the criticism on the part of Black franchisees for their treatment within the McDonald’s system, but the pressures they have been facing as a result of claims of racial discrimination at the corporate headquarters,” Chatelain said. “This had probably set up a process of collaborating with Travis Scott, if it didn’t necessarily inspire it.”

Chatelain added she thinks the recently announced collaboration with Balvin, who’s one of the biggest Latin artists in the world right now, isn’t a coincidence.

“There’s no question that this is an attempt to try to shore up brand recognition and brand loyalty for McDonald’s on the part of consumers of color,” Chatelain said. “[McDonald’s] knows that that market spends a lot of money on fast food, that that market is consuming fast food regularly and for multiple meals. They know where their restaurants are; they also know who has grown up eating McDonald’s.”

In the wake of Vice’s report, McDonald’s emphatically denied the Scott and Balvin meals are attempts to distract from the two lawsuits. Read the statement below.

“Any claim that McDonald’s collaboration with Travis Scott was launched in response to recent litigation is completely false. We teamed up with Travis—and our newest celebrity partner, J Balvin—because of their love for the McDonald’s brand, their widespread appeal and their loyal following among our younger customers and our crew. In regards to the litigation—these allegations fly in the face of everything we stand for as an organization and as a partner to communities and small business owners around the world. Not only do we categorically deny the allegations, but we are confident that the facts will show how committed we are to the diversity and equal opportunity of the McDonald’s System, including across our franchisees, suppliers and employees.”