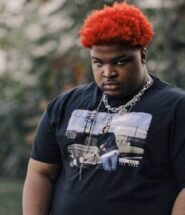 Mario Judah’s larger than life persona and husky frame wasn’t always the case. Judah took to Instagram on Tuesday (December 29) to share a few throwback photos from the days he roamed the halls of his middle school and military barracks, which found him looking much thinner than who we see now.

The younger Judah looks damn near unrecognizable compared to his look today. The photo dump saw a few serious selfies rocking an array of Polo gear, which fits perfectly with the early-to-mid 2010s. His followers got a solid laugh out of the post, as most took the opportunity to joke at Judah’s expense.

One user wrote, “Cardio Judah” while another warned Judah how these could be used as a meme in the future.

During an interview with OurGenerationMusic, the Atlanta native chalked his weight gain up to staying inside and making beats all day honing his craft instead of spending time outdoors and exercising.

“I sat down every single day and made beats,” Judah explained. “So because of that, as time went on, I started gaining weight because I wouldn’t go outside and get any exercise. So when people make jokes, I laugh at it because they don’t know why I got like this. I got this fat because I was making beats and working my ass off. I sacrificed my weight and talking to girls just for this music shit.”