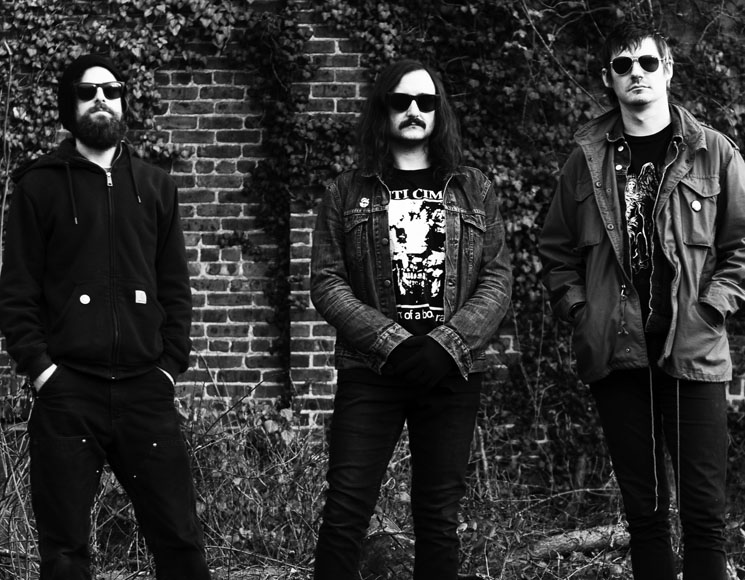 "My week has been kind fucked," Chris Ulsh admits.

His death metal/punk brainchild, Mammoth Grinder, is about to unleash Cosmic Crypt, the band's first LP with renowned metal label Relapse. A week later, they will be doing a month-long American tour. When Ulsh spoke to Exclaim!, he was in transit from a Florida festival appearance with Iron Age (with whom he plays guitar); Power Trip, in which he's the drummer, also just announced a spring tour. But Ulsh believes none this will impact Mammoth Grinder.

"It's been nice that I can pick up this band and put it down whenever I'm able," he says. "We didn't have to tour on this record if we didn't want, but I really wanted to. I was worried how things would go after not playing a Mammoth Grinder show for four years, but we decided to go for it," Ulsh says.

Ulsh's love death metal, punk and hardcore is at the forefront Cosmic Crypt. His relationship with extreme music dates back to high school; he recalls Poison Idea's Pick Your King and Mayhem's Deathcrush as standouts.

"I never had an older sibling to show me stuff. I've always just been on my own," Ulsh says. "That's when I started getting into '80s hardcore and realizing there was crazier sounding underground metal, more so than Slayer. I heard Discharge and probably ruined my life because it."

In similar fashion to those decades-old releases, Cosmic Crypt was made as an analogue recording.

"We wanted to give it the same feeling it would have whenever we're playing on tour. We didn't want to use a click track or copy and paste stuff digitally. We wanted it to be a raw death metal album," Ulsh says.

Once the songs were captured, they were put into the hands Arthur Rizk, who also recorded Power Trip's breakout Nightmare Logic. Ulsh discloses that after seeing Rizk at FYA Festival, he realized that the two worked on seven projects together in the last year alone. A large portion those recordings are still unreleased.

"I think he's a genius. If I send him something, I don't need to do a lot explaining. We're on the same wavelength. I'm not good at articulating things, but if I say something that doesn't make any sense, he can make sense it," Ulsh says. "Anytime I record anything with anyone else, it usually goes through a few rounds mixing. With Arthur, it's almost immediate. I wanted to have ears and eyes outside the band — people who I know I can trust."

Joe Petagno, who has drawn for Motörhead and Pink Floyd, among others, provided his services for Cosmic Crypt's cover art. Just as he did with Rizk, Ulsh put his faith in Petagno, sending early demos and the album's title.

"I knew what I wanted to call the record for a few years. He thought the name was really cool, so I let him roll with it," Ulsh says. "I'm not super visually inclined. I knew he would come up with something cooler if I didn't tell him what to do. I think it worked out really nicely. It's my favourite one that he's done so far."

The visuals are a pertinent demonstration what Ulsh says is Mammoth Grinder's "filthiest album yet."

"I think the songs feel harder and a bit rawer. It's very straight to the point and kind noisy. The vocals are a lot more fucked up, which is a good thing, I think," Ulsh says.

"This LP is a lot closer to the way that I heard the record in my head when I was writing it, more than any other record that we've done so far. Maybe that's a dark place, but I just try to write shit that I want to listen to."