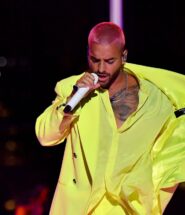 Hope you’re buckled up because Maluma is taking the 2020 Video Music Awards to the drive-in.

In an interview with MTV leading up to the VMAs, the Colombian heartthrob teased his upcoming performance as being “electric” and “vintage”—and he stayed true to his word with the live debut of his song, “Hawái,” at a drive-in overlooking the New York City skyline.

Surrounded by glittery purple palm trees and swimsuit-clad dancers, Maluma, sporting a sunny yellow suit, brought the tropical vibes of “Hawái” to the big city. Performing on a drive-in stage bathed in purple lights, as fans watched from their cars, the “Chantaje” singer made his way down and danced his way through the cars to a stage in the middle of the parking lot, ending his performance with a fireworks display that lit up the sky over New York’s East River.

But that wasn’t the only airtime Maluma got during the awards show. Immediately following his purple performance, the VMAs took it back to the drive-in to present Maluma with the moon person for Best Latin Video for 2019’s “Qué Pena.”

“I can’t believe this. It’s beautiful,” he told the crowd while clutching his award. “Thank you to all my fans for their love and affection you show me every day. Especially to my mom and dad and little sister who are watching from home. Everything I do, I do for them.”

Maluma was previously nominated three times before at the VMAs. This was his first win.