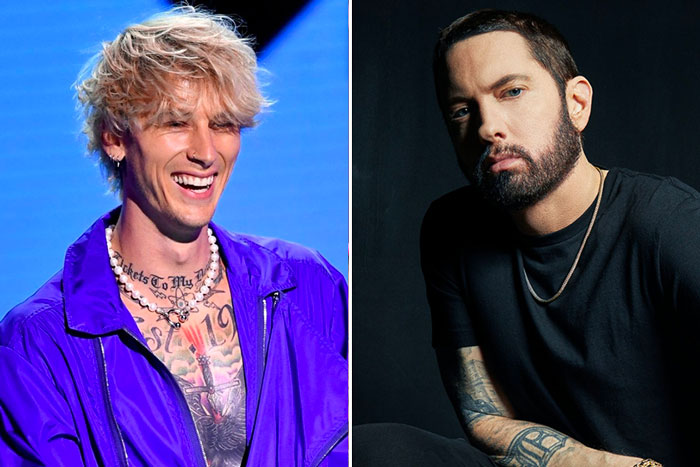 Eminem is revisiting his beef with Machine Gun Kelly.

On his surprise album Music to Be Murdered By – Side B (Deluxe Edition), which dropped Friday, the “Rap God” reignites their rivalry on a pair of tracks.

On “Zeus,” Em starts off by addressing the infamous feud. “Fair weather, wishy-washy / She thinks Machine washed me / Swear to God, man, her favorite rapper wish he’d crossed me,” he raps.

On “Gnat,” for which he also released a video, Em seemingly makes reference to MGK on the hook. “They come at me with machine guns / Like trying to fight off a gnat.”

It didn’t take long for MGK to clap back. After hearing Em’s thinly-veiled shots, he responded on Twitter. “those subliminals,” he wrote, adding the crying laughing face and trash can emojis.

In a recent Q&A with Interview magazine, MGK said that his rivalry with the “Rap Devil” overshadowed the release of his 2019 album Hotel Diablo. “It was coming off the tail-end of that infamous beef [with Eminem]. So no one wanted to give it the time of day,” he said.

He blamed the project’s underwhelming performance on his beef with Slim Shady. “It’s like if you make a shitty movie and then you come out with a great movie right after, but people want to focus on the fact that they hated whatever you just did,” he added. “What I did in the beef was exactly what it should be, but that project wasn’t welcomed.”

The two have been going back and forth since Em dropped his Kamikaze track “Not Alike” in 2018, prompting Kelly to fire back with his “Rap Devil” diss.

Machine Gun Kelly was not the only one on the receiving end of Em’s bars. He also called out Snoop Dogg and 6ix9ine on “Zeus.”