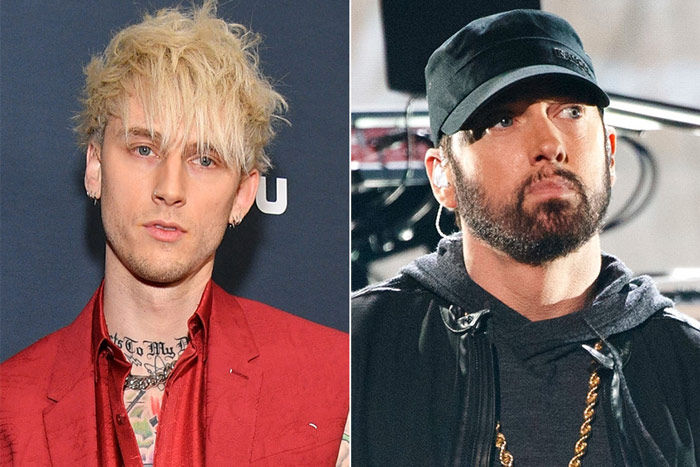 Machine Gun Kelly is not finished.

A year-and-a-half after exchanging disses, the Cleveland rapper is still relishing in his feud with Eminem. On his new single “Bullets with Names” featuring Young Thug, RJMrLA, and Lil Duke, which dropped Friday, MGK makes reference to the “Rap God.” Over the ruthless trap beat, he boasts about killing a “goat” and putting him in his coffin.

“Killed me a goat so my jacket got stains on it / Wipin’ my nose like I got some cocaine on it,” he raps on his rapid-fire verse. “Pulled out his coffin and ate me a plate on it / Called up his bitch, showed my dick, let ’em lay on it.”

In January, MGK took another shot at his idol-turned-rival after Em participated in the viral Dolly Parton Challenge. “50 year old artists tryna be relevant to the youth by posting trending meme’s is something i never thought i’d see #2020,” he wrote in response to the meme.

Eminem previously declared that their long-running beef was over on “Unaccommodating” off his album Music To Be Murdered By. “But when they ask me is the war finished with MGK? Of course it is,” raps Slim Shady. “I cleansed him of his mortal sins, I’m God and the Lord forgives, even the devil worshippers / I’m moving on.”

The two ignited their beef in the summer of 2018 with a series of diss tracks. After hearing MGK’s verse on Tech N9ne’s “No Reason,” Eminem fired the first round on his Kamikaze cut “Not Alike.” Shortly after, MGK returned fire on “Rap Devil,” inspired by Em’s own 2013 track “Rap God.”

“Bullets with Names” arrives ahead of MGK’s upcoming album Tickets to My Downfall, due later this year. He can also be seen in Jason Orley’s comedy Big Time Adolescence and in the upcoming action-western The Last Song of Issac LeMay.