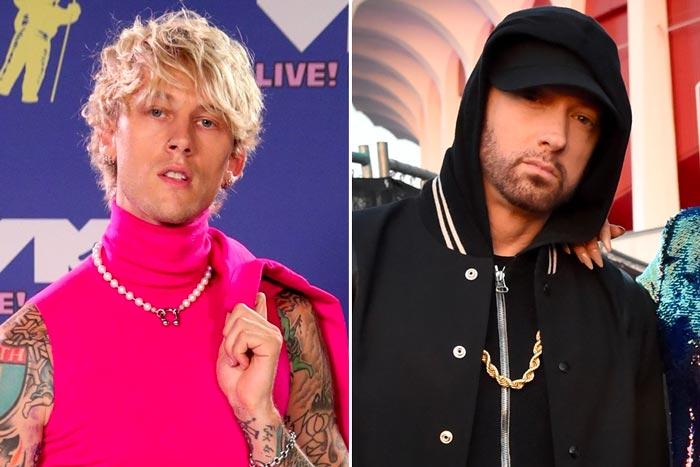 Machine Gun Kelly is revisiting his rivalry with Eminem.

With promoting his new album Tickets to My Downfall on SiriusXM’s “The Howard Stern Show,” the Cleveland rapper was asked about his long-running feud with Slim Shady. He acknowledged that Em was a “hero” to him before he found himself on the receiving end of his disses.

“I’m like asleep in my tour bus and this fu**in’ guy drops an album [Kamikaze] with like three songs consecutively talking about me,” MGK said. “What the f**k you think I’ma do, just roll over and go back to sleep? Get the f**k outta here. You’re not gonna ho me. I said what I said and respect the fight, that’s it.”

But MGK still doesn’t understand why Em would choose to direct his anger at him. “This fool has goddamn wealth beyond,” he said. “I’m just a different dude. I’m all about putting my arm around people… I can’t relate. That’s the last thing I ever want to be is an angry legend.”

Stern proposed a meeting between the rivals so they can squash their beef. “We’ll have a whole love fest and it will be a beautiful thing,” he said, prompting MGK to laugh.

Elsewhere, MGK opened up about finding true love with girlfriend Megan Fox. “I didn’t know what that was until me and her made eye contact. That’s when I was like, ‘Whoa,’” he said. Stern asked if it was love at first sight, to which MGK responded, “Yeah, for sure.”

His new album Tickets to My Downfall arrives Friday. “I just want to go against what everyone else thinks,” he said. “I make a pop-punk record … and everyone’s like, ‘You switched genres!’ To me, I just added on to the multiple things I’ve already done anyway, but, sure, what a narrow-minded way to look at things.”