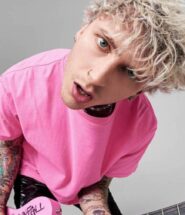 Los Angeles, CA – In a recent music roundtable video conference call with fellow Project Power cast members Chika and Jamie Foxx, rapper-turned-actor Machine Gun Kelly set the record straight regarding questions surrounding his commitment to his career as a Hip Hop artist while also making a case for his continued enrichment as an actor.

Stemming from the group’s previous spitball conversation centered around hypothetical Verzuz style head-to-head acting matches with mega-celebrities, MGK, flat out told HipHopDX Editor-In-Chief Trent Clark, “No, I am not leaving [Hip Hop] yet.”

“I’m not leaving here — I mean, André 3000 said it my favorite way, is that ‘Hip Hop is a young man’s game,’ So essentially when I don’t have, or when I’ve stopped living a certain way, or if I don’t have the right vigor to deliver my lyrics with then I’ll stop. But I mean, I’m a fresh 30 and I’m still fully out here. So I don’t think that Hip Hop is going to stop for me at all,” he said.

On Friday (Septemeber 25), the Cleveland-bred rapper released his fifth studio album Tickets To My Downfall, marking a sharp departarure from his rap roots.

During the interview, he also admitted to receiving inspiration from his Academy Award-winning co-star, who historically released his Billboard Hot 100 chart-topping record “Blame It” (with T-Pain) and delivered a critically acclaimed performance in the DreamWorks Pictures film The Soloist — all in 2009.

“I think that I’m doing something that hasn’t been seen yet, and that is just unusual and that people don’t know how to categorize it,” he said.

“So it’s being seen as I’m leaving or departing something and doing this, when it’s like the same way that when I look back at Jamie and I’m like, ‘How crazy is it that he was this insane piano player and also like a great vocalist, but also a comedian who also is an actor who also has been, who was also at a number one record’ It’s just, we don’t give him his flowers yet because we don’t know what the fuck to call them. We call EGOT’s … because we kind of know what it’s called. You might fuck around and be an EGOT.”

Foxx jumped in and affirmed his support for Machine Gun Kelly’s music and also praised his unique ability to portray characters on the big screen.

“It’s [Hip Hop] not going to stop, but what I can tell you from being on a set with him, you got to understand, there is a thing, that natural quality that a lot of people don’t possess that he had,” the Oscar-winning actor began.

“That natural quality that had us going like — Yo, the way he was embodying this character and what he had to go through to get it speaks volumes. I hope that he continues to do that, man, because now we are able to do whatever we want to do,” he continued. “The doors are wide open and we don’t have to stay in no category, man. I want to see it. Even the ensemble Bird Box and just, those moments where you just go like, ooh, you’re giving those breaths of fresh air, man. So I can’t wait to see what else he tackles.”

MGK also revealed that he will appear in a Western-style project this year and has every intention of seeking out even bigger opportunities to appear in big-budget studio films.

“I only have one lead under my belt. It was a biopic [The Dirt]. It was for Motley Crue where I played Tommy Lee. So I’m playing a Western this year. Then, I kind of want to get a couple more moments where I’m on the screen for 40 minutes or more for every film.”

In the recent Netflix film, MGK plays the role of a literal hot-head drug dealer and comes to face-to-face with Foxx after taking a dangerous drug that gives users superpowers.

Check out the trailer for the Project Power below and listen to Machine Gun Kelly’s Tickets To My Downfall above. The project features Travis Barker, Trippie Redd, Halsey and more. Fans can catch him performing the album in full alongside Barker via live stream on October 1.