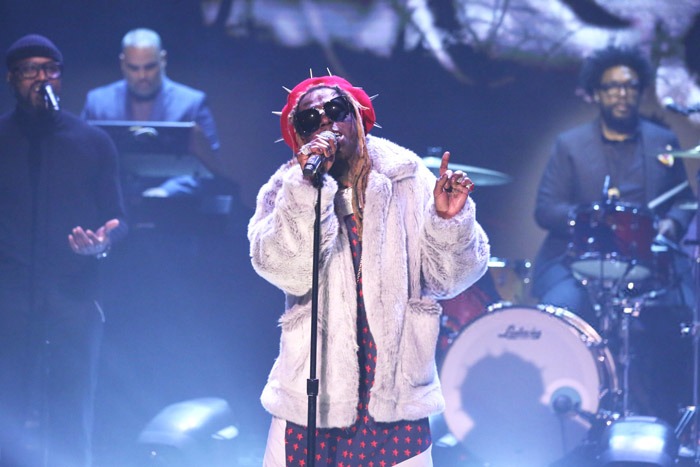 Tunechi takes over “The Tonight Show.”

Following the release of his 13th studio album Funeral last week, Lil Wayne stopped by “The Tonight Show Starring Jimmy Fallon” on Wednesday. Accompanied by The Roots, he performed one of the 24 tracks, “Dreams,” on the Studio 6-B stage.

“I had a dream I was broke / No diamonds and no gold / Most saddest story ever told,” rapped Weezy while wearing an oversized fur coat and spiked red beret. “I woke up and I screamed / Thank God it was just a dream.”

Weezy also participated in a game of Virtual Reality Pictionary. He teamed up with actress Claire Danes to face off against Jimmy and Lana Condor. After his drawings of popcorn shrimp and Harry Potter, he managed to score a victory.

Earlier in the week, the newly-engaged rapper promoted his new album with a surprise appearance on “The Masked Singer.” He was revealed as the Robot during the season premiere following the Super Bowl.

Funeral, which features Big Sean, Adam Levine, and XXXTentacion, is expected to debut at No. 1 on the Billboard 200 with 115-130,000 equivalent album units.