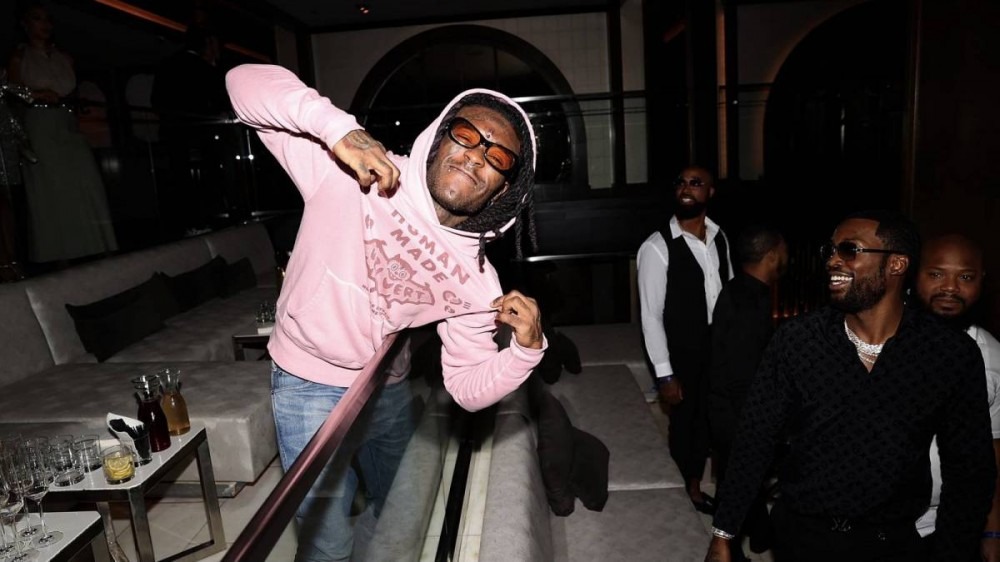 Hip Hop has a fascinating history with legendary fashion designer NIGO. The Japanese-born designer is a known Hip Hop addict who regularly bumped tracks by LL COOL J, Beastie Boys and Public Enemy while growing up in The Land of the Rising Sun. In 1993, NIGO created A Bathing Ape (BAPE), a streetwear brand that would become a fashion staple in Hip Hop culture during the early to mid-’00s.

Thanks to superstar rappers such as Lil Wayne, Kanye West and more, NIGO became an icon in Hip Hop fashion, and his clothes were the must-have item on the market. Teenagers and young adults would flock to SoHo in New York City or purchase a plane ticket to Japan to try their luck at buying pieces such as the infamous shark hoodie or a Baby Milo t-shirt from the respected fashion company.

As much as rappers love wearing the brand, there aren’t too many who have actually worked with NIGO, though.

NIGO doesn’t typically have rappers collaborate with his brands, and if he does, the artist has an excellent friendship with the designer. That’s why Lil Uzi Vert’s upcoming collaboration with NIGO’s HUMAN MADE brand is a huge milestone for the Eternal Atake rapper. Lil Uzi Vert will be joining an exclusive club of people who’ve gotten a chance to work in the lab with NIGO.

During his walk down the blue carpet for the 18th-anniversary celebration for JAY-Z’s 40/40 Club on August 28, Lil Uzi Vert told HipHopDX what’s going through his mind joining such an elusive group.

“It’s amazing because I’m really not that old yet, and back in like 2010, 2011, 2012, that was prime for me,” Uzi said while wearing a pink hoodie with a bat illustration from the collaboration. “That was stuff that we was like to die for, and I would just go around to different places like Abacus and stuff just trying to find stuff.”

HUMAN MADE X LIL UZI VERT@LILUZIVERT explains what it feels like joining @KidCudi and @Pharrell in the exclusive club of rappers to work with the legendary NIGO pic.twitter.com/63WDrxfdsS

Lil Uzi Vert was like all the other kids trying to purchase a rare piece by BAPE back in the day, and collaborating with NIGO is a full-circle moment. Being acknowledged by a brand he grew up admiring helps him understand how far he’s come running around shops in Philly searching for the hottest clothing items.

Uzi added, “It’s just amazing that they actually acknowledged me because I’ve been acknowledging them before they even knew who I was.”

Besides Baby Pluto, only a handful of Hip Hop figures can say they’ve worked with and dropped collaborations with NIGO. In February, Kid Cudi released his first-ever, limited-edition BAPE capsule collection, celebrating his seventh studio album Man on the Moon III: The Chosen. He has also been photographed alongside NIGO several times over the years.

Drake’s OVO brand linked up with BAPE for a unique collaboration in October 2020, but Pharrell Williams has all the bragging rights when it comes to working with NIGO.

The iconic super-producer has not only collaborated with the famed Japanese designer, but he also opened another fashion company with him called Billionaire Boys Club. They also worked closely together on Pharrell’s Ice Cream footwear line.

Today, NIGO’s contributions to Hip Hop fashion are cemented through BAPE, and although he’s no longer a part of the company, the 50-year-old still finds a way to impact the culture he fell in love with as a kid. Through his HUMAN MADE collaboration, Lil Uzi Vert may help keep that legacy alive. Uzi is one of the leaders of the new school of Hip Hop artists and a burgeoning fashion icon, so it makes sense why NIGO would work with him.

There’s no word on when the HUMAN MADE x Lil Uzi Vert collaboration will get a release date, and fans are dying for any bit of information. Word of the exclusive collection got out after Lil Uzi Vert showed a pillow and the pink hoodie he wore on the blue carpet on Instagram. NIGO amplified the hype Uzi conjured up with an Instagram Story showing the pink hoodie.

Lil Uzi Vert recently hit the New York City streets before the 40/40 celebration earlier on Saturday night (August 29), allegedly giving out various pieces from the collection. If the collaboration remains unreleased, fans who were lucky to get free merch, while Uzi did a mini-giveaway may see a hefty bag come their way on resale sites such as StockX and GOAT.