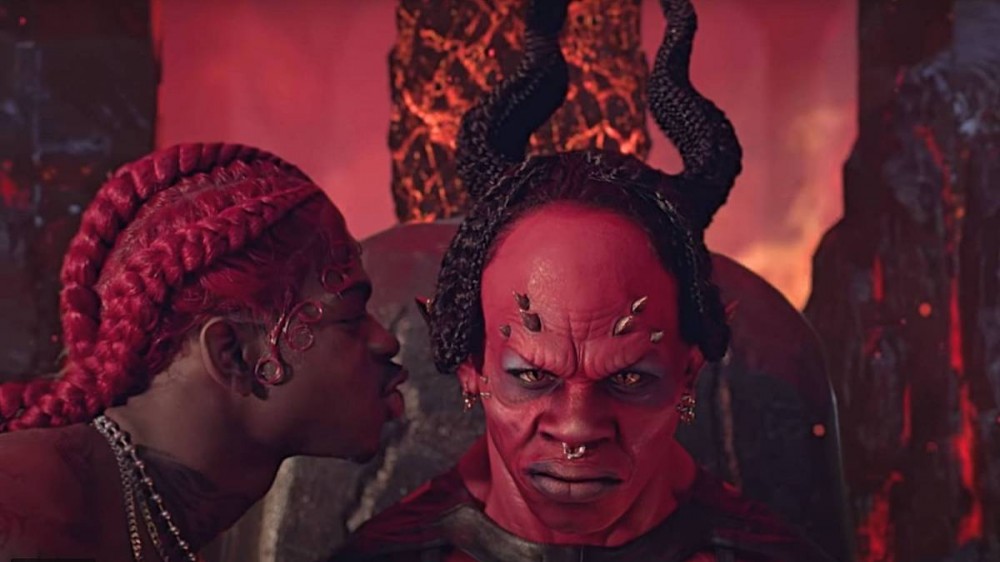 Lil Nas X found himself a trending Twitter topic over the weekend when he unveiled his new “Satan Shoes.” The shoes will reportedly contain 66 CCs of red ink and one drop of human blood in its sole. Other features of the infernal footwear are a pentagram pendant over the laces and “Luke 10:18” written on the side, a Bible verse about Satan’s fall from heaven.

The announcement came shortly after his controversial video for “Montero (Call Me By Your Name)” went viral due to its sexually explicit content and satanic theme. For retired NBA star Nick Young, it wasn’t the Grammy Award-winning rapper giving Satan a lap dance that pushed him over the edge — it was the devilish kicks.

On Sunday morning (March 28), Young revealed there’s now a Lil Nas X ban in the Young household and admitted he was thinking about boycotting Nike – even though the retail giant wasn’t involved in the creation of the shoe.

“My kids will never play Old Town road again,” he tweeted. “I’m still debating about wearing @Nike after this come nike a drop of blood for real.”

My kids will never play Old Town road again.. I’m still debating about wearing @Nike after this come nike a drop of blood for real

A few hours later, Lil Nas X replied to Young’s message with a healthy dose of sarcasm, writing, “they shouldn’t be playing old town road anyway, we streaming call me by your name now.”

they shouldn’t be playing old town road anyway, we streaming call me by your name now 😌 https://t.co/jt6vr8KUbA

Only 666 of the limited edition shoes will be produced and each pair will be individually numbered but come with a hefty price tag of $1,018. While the shoes are Nike’s classic Air Max ’97s, Nike has made it clear they had nothing to do with the creation or sale of the shoes.

In fact, Nike told Snopes in an email: “Nike did not release nor design these shoes.” Instead, the Air Max ’97 shoes were bought independently. In this case, Lil Nas X teamed up with the MSCHF clothing brand to come up with the unique take on the popular Nike shoe.

Young isn’t the only one offended by the collaboration. Pastor Mark Burns, who has appeared as a commentator on CNN and Fox News, tweeted, “This is evil and heresy and I pray that Christians rise up against this,” while Grammy Award-winning Christian singer Kaya Jones tweeted, “I told y’all what was up a long time ago! You are ready for what we are facing. Better start reading your Bible!”

In response to the criticism, the openly gay artist vowed not to bow down to the pressures of making “kid-friendly” videos like “Old Town Road.”

“i made the decision to create the music video,” he wrote in part. “i am an adult. i am not gonna spend my entire career trying to cater to your children. that is your job.”

there was no system involved. i made the decision to create the music video. i am an adult. i am not gonna spend my entire career trying to cater to your children. that is your job. https://t.co/SzjjYe2tf4