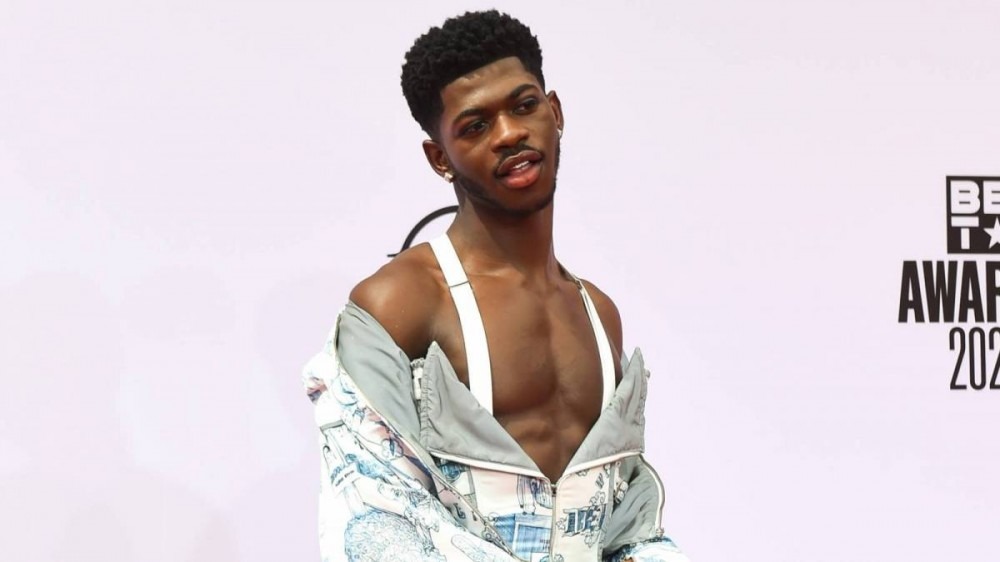 Lil Nas X trolled Drake fans on Monday (August 30) with a spoof of the Certified Lover Boy cover art, which featured 12 pregnant women emojis of various ethnicities (and yes, that’s the real cover). Now, Lil Nas X is back with the official cover for his debut MONTERO album.

This time, the pregnant men emojis have been replaced by a photo of a naked, levitating Lil Nas X surrounded by a utopian world flooded with cherry blossoms, greenery, butterflies and water.

Lil Nas X first rose to notoriety with his 2019 breakthrough hit “Old Town Road” featuring country star Billy Ray Cyrus. After coming out in 2019, the 22-year-old Georgia native has often been the subject of ridicule, but he typically welcomes it with his signature sense of humor intact as a way to fend off the trolls. But Lil Nas X didn’t initially understand what the big deal was — still really doesn’t.

In June 2019, he got the chance to perform in front of 180,000 people with Miley and Billy Ray Cyrus during the Glastonbury Festival in Glastonbury, England. The overwhelming love and support he received that night reportedly inspired him to come out as gay. In a tweet later that evening, he directed his fans to listen to the song “c7osure (You Like)” from his the 7 EP.

“some of y’all already know,” he wrote via Twitter at the time. “some of y’all don’t care, some of y’all not gone fwm no more. but before this month ends i want y’all to listen closely to c7osure.”

The lyrics go, “True say, I want and I need to let go, use my time to be free/Ain’t no more actin’, man that forecast say I should just let me grow/No more red light for me baby, only green, I gotta go/Pack my past up in the back, oh, let my future take ahold/This is what I gotta do, can’t be regrettin’ when I’m old.”

But Lil Nas X’s career has still been marred by controversy and overt discrimination for his sexual preference. His decision to grind on top of Satan’s lap for the “MONTERO” video and release blood-infused “Satan Shoes” had Christian conservatives clutching their proverbial pearls. But according to Lil Nas X, he will return to his roots when the “gay era” is finished.

On August 6, he tweeted, “after i drop the album i will be finish with my gay era and returning to my cowboy era.”

Until then, check out MONTERO when it arrives on September 17 and watch the trailer below.