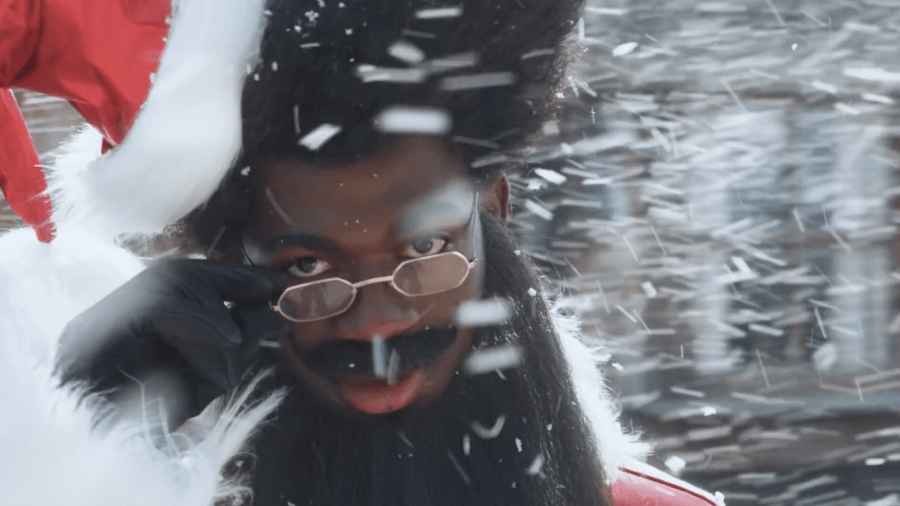 It’s coming up on two years since Lil Nas X last released new music, but he’s putting an end to the drought this week. The “Old Town Road” hitmaker has announced his new single is titled “Holiday” and will be released on Friday (November 13) — just in time for the holiday season.

A Back to the Future-themed trailer premiered during the NBC broadcast of Tampa Bay Buccaneers vs. New Orleans Saints on Sunday (November 8), providing a snippet of the Tay Keith and Take A Daytrip-produced song. In the clip itself, Lil Nas X returns to the setting of “Old Town Road,” before morphing into Santa Claus as horses grow reindeer antlers and snow starts to fall.

Lil Nas goes shooting off into the sky in a sleigh, but gets a warning from Michael J. Fox in his famed role as Marty McFly: “Whatever you do Nas, don’t go to 2020.”

“MY FIRST SINGLE IN ALMOST 2 YEARS “HOLIDAY” IS OUT THIS FRIDAY!” Lil Nas wrote on Twitter.

MY FIRST SINGLE IN ALMOST 2 YEARS “HOLIDAY” IS OUT THIS FRIDAY! 🎅🏾❄️ pic.twitter.com/5quf8NHUO2

A Twitter user reacted to the video, saying, “This dude need to stop hanging onto that ‘Old Town Road’ shit… fucking dweeb.” In a since-deleted tweet, Lil Nas responded, “This is literally what the video is about.”

He also teased another new track called “Call Me by Your Name” dropping on the same day as “Holiday.” The song is named after Luca Guadagnino’s Oscar-winning 2017 film of the same name, and was first previewed in July.

For this year’s Halloween, Lil Nas X dressed up as Nicki Minaj from her “Super Bass” music video, which prompted responses from various rappers. Lil Nas responded to Dave East after the Harlem-bred rapper wrote “BATTY MON” on his Instagram Stories while speaking on the costume.

“It’s ‘batty man,’” Lil Nas said on Twitter. “N-ggas can’t even be homophobic the proper way smh butchering the hell out of the patois.”

Lil Nas X is planning to release a children’s book called C Is for Country in January, which will follow the story of “Panini the pony on a joyous journey through the alphabet from sunup to sundown,” according to Penguin Random House.

“I’m dropping the best kids book of all time soon!” he revealed in September. “C IS FOR COUNTRY, out January 5, 2021 from @randomhousekids. I can’t wait to share it with you all.”