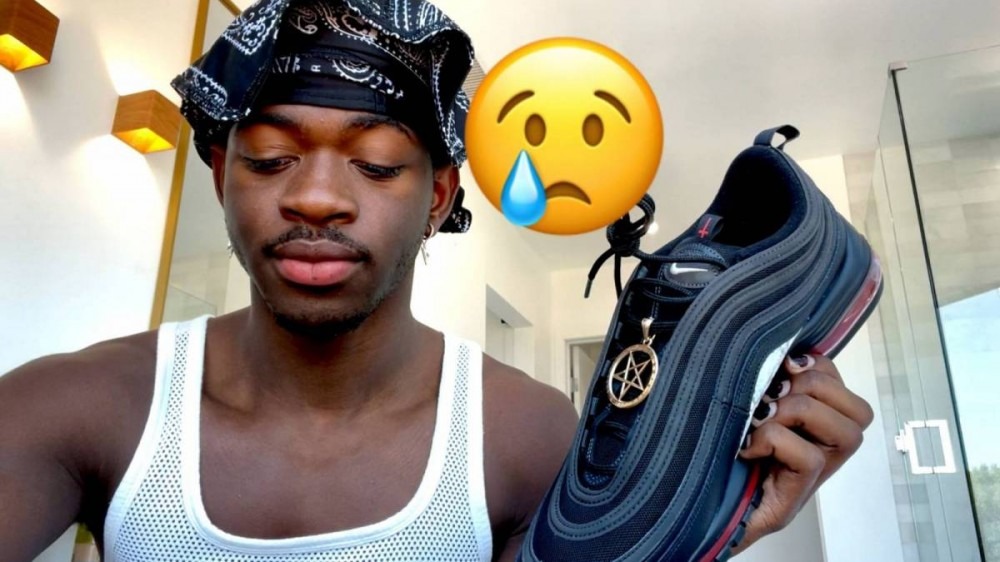 Lil Nas X is facing a healthy amount of backlash for both his satanic-themed “Montero (Call Me By My Name)” video and equally as demonic “Satan Shoes.” On Sunday (March 28), retired NBA star Nick Young revealed “Old Town Road” was officially banned in the Young household and was contemplating a Nike boycott – even though the sneaker giant actually had nothing to do with the creation of the shoe.

The Grammy Award-winning artist and clothing company MSCHF simply customized 666 pairs of Nike’s classic Air Max ’97s to contain 66 CCs of red ink and one drop of human blood in its sole. Not long after Young’s post started circulating on Twitter, Lil Nas X appeared to issue an apology to anyone offended by the devilish kicks. But in true troll fashion, once people clicked on the link, they got a rude awakening.

The YouTube clip begins with Lil Nas X holding up one of the shoes, pentagram dangling off the zipper, and saying, “OK guys, I see everybody’s been talking about this shoe and I just want to come forth and say…” The clip then morphs into a snippet from the “Montero” video in which Lil Nas whispers into Satan’s ear, “Fuck it. Let’s ride.”

From there, Lil Nas X is seen grinding on Satan’s lap in nothing but a pair of boy shorts and thigh-high leather boots as he sings, “Call me by your name.”

The viral “Montero” video has been under fire since its release on Friday (March 25). Pastor Mark Burns, who has appeared as a commentator on CNN and Fox News, tweeted, “This is evil and heresy and I pray that Christians rise up against this,” while Grammy Award-winning Christian singer Kaya Jones tweeted, “I told y’all what was up a long time ago! You are ready for what we are facing. Better start reading your Bible!”

In response to the criticism, the openly gay artist vowed not to bow down to the pressures of making “kid-friendly” videos like “Old Town Road.”

“i made the decision to create the music video,” he wrote in part. “i am an adult. i am not gonna spend my entire career trying to cater to your children. that is your job.”

Clearly, he’s not about to apologize for his artistic vision. The “Montero” visual has racked up over 25 million YouTube views. Check it out below.