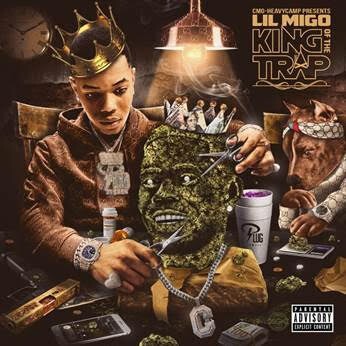 As part of the announcement, Migo also unveiled the visual for his new single, “Big Dog,” which is off King Of The Trap. WATCH “Big Dog” HERE.

The Memphis native has quickly established himself as the latest rising star to emerge from the city’s burgeoning music scene. After releasing his Price of Fame mixtape in 2020, Migo has maintained his momentum, collaborating with Youngsta, MoneyBagg Yo and LightSkin Keisha on his singles and delivering a strong verse on “You Can See” from Bagg and Youngsta’s joint mixtape, Code Red.

Most recently, Migo teamed up with fellow newcomer EST Gee to release their newest collaboration “By Yo Side.” With the release of “Big Dog” and his new project,Migo is looking to introduce a new generation of Memphis trap sound to the masses.

“I’ve been mentored by some of the best in the game in Blac Youngsta and Yo Gotti and now I’m ready to carve out my lane and make 2021 my year,” Migo said. “I want to keep putting on for Memphis, and that starts with this new project.”

The King Of The Trap release comes during a memorable week for Migo, who was recently gifted a $400K Lamborghini Aventador by Youngsta as a birthday present at the CMG All-Star Brunch that took place during NBA All-Star Weekend in Atlanta.

Migo formally burst onto the scene in early-2019 with the release of his first hit “Rockstar,” a song that garnered over 3.3 million views on YouTube and quickly caught the attention of Youngsta – a fellow Memphis native – on Instagram.

After exchanging messages with Youngsta over the course of several months, Migo ultimately signed to the veteran’s Heavy Camp record label in Nov. 2019. Youngsta and CMG CEO Yo Gotti publicly announced Migo’s addition to the CMG-Heavy Camp family during a performance in Memphis on Nov. 29, 2019, where they presented the young phenom with an iced-out Heavy Camp chain to celebrate the signing.

King Of The Trap – Tracklist