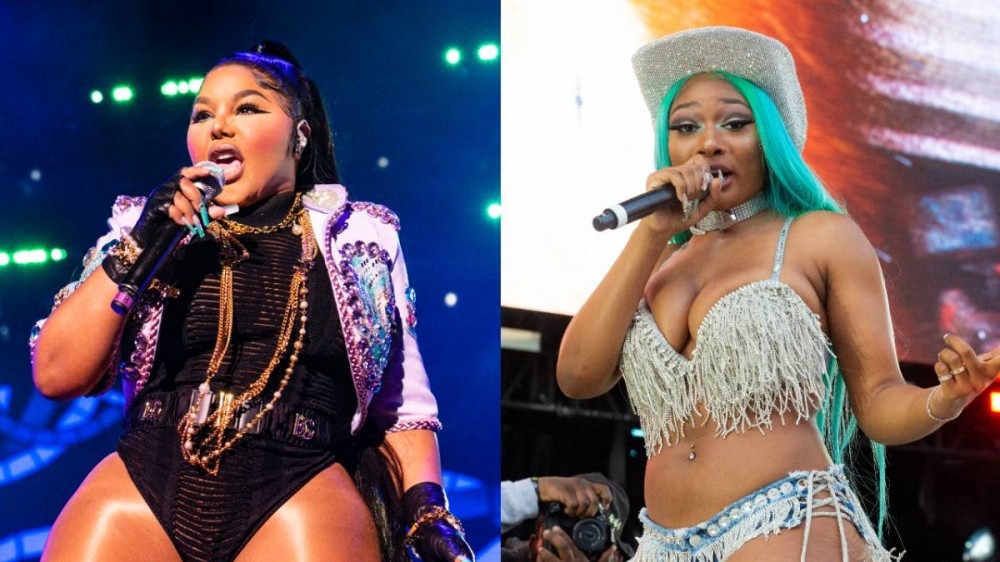 Lil’ Kim has removed her remix of Megan Thee Stallion’s “Plan B” after having it up on streaming for just a few hours.

Kim previously teased a collaboration between her and the Houston Hottie a few weeks ago by posting a cropped photo of their intertwined elbows. She then unveiled the full photo on Wednesday (September 7) which showed Kim and Meg sitting on a private jet and sipping on champagne.

Funk Flex also reposted the photo to his IG and said the new track would premiere on his Hot 97 radio program on Thursday (September 8). While the track’s premiere went off without a hitch, the remix was removed from streaming by Friday (September 9) afternoon.

On YouTube, it simply reads: “This video is no longer available due to a copyright claim by International Federation of the Phonographic Industry.”

HipHopDX has reached out to representatives for both rappers regarding the abrupt removal, but as of writing, no comment has been given.

Fif tagged Nicki in a since-deleted Instagram post, and demanded the Pinkprint rapper “light” Kim up for the verse.

“QGTM @nickiminaj you better light her ass up i’m watching,” he wrote. “she said something about the baby. her baby eye fucked up. LOL.”

Lil Kim responded in the comments: “It’s ok he just doin what bitch n-ggaz do. Now watch what God do to his Life !”

“I never said a word about anyone’s child,” Kim elaborated on her IG Story. “Please feel free to listen to the song where we were clearly talking about an EX,” she said. “To try and twist my words to have an excuse to take digs at my child is disgusting. I’m one of the most disrespected legends in the game but what you will not do is come for MY CHILD.”

She continued in part: “It’s so crazy how a song about bitch ass n-ggas could touch a bitch ass n-ggas soul so deeply that he results to attacking a child. Oh yeah it’s official to say… I’M THAT BITCH!!!! Okayyyyy 50 you got me! The song was about YOU!!!!”

Fans on Twitter have been chattering about “Plan B’s” removal, with some theorizing that 50 Cent’s comments prompted Kim to take the remix down.

“I seen a lot of ppl saying Nicki and/or 50 sabotage the remix by getting it taken down off of YT,” one fan wrote. “But why would Lil Kim up load Plan B remix on her channel? Why didn’t Megan? Why didn’t Megan give her clearance before a ‘CC’ occurred. It’s simple business 101 Dummies.”

I seen alot of ppl saying Nicki and/or 50 sabotage the remix by getting it taken down off of YT. But why would Lil Kim up load Plan B remix on her channel? Why didn't Megan? Why didn't Megan give her clearance before a "CC" occured. It's simple business 101 Dummies

This remix served as the first time Megan and Kim have linked up on a song together, but the latter has had a contentious relationship with Nicki Minaj over the years.

The rap stars traded diss tracks and subliminal shots during a 2010 feud, but tensions have cooled down in recent years. During an interview with Joe Budden in March, Nicki Minaj even shouted out Lil Kim’s  “influence” and argued she should’ve been on the cover of American Vogue already.

50 Cent and Lil’ Kim have also had their fair share of disputes. Fiddy once compared her to Lubdan, a troll-looking character from the 1993 comedy horror film Leprechaun, as well as an owl, but Kim took the mogul’s trolling in stride.

“The accuracy, hilarious,” Kim said of the owl in July 2021. “I ain’t bothered not one bit. My family & friends more mad than me. Shit like this don’t move me one way or another cause I’m still a bad bitch that n-ggaz bitches, mommies, daughters, and aunties still want to be till this day and I love it!!”