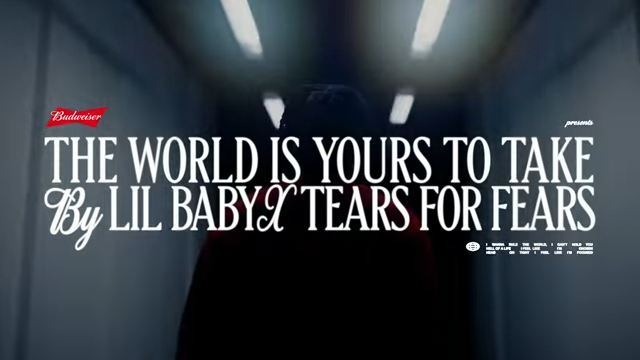 Lil Baby and Budweiser are teaming up to deliver “The World Is Yours To Take,” a new single that will be included in promotional material from Budweiser, The Official Beer of the FIFA World Cup, as well as the first-ever Official FIFA World Cup Qatar 2022 Soundtrack. Tears For Fears’ smash hit song “Everybody Wants to Rule the World” is sampled in the upbeat anthem, motivating listeners to start their path to success. The popular song is universally appealing and captures the upbeat vibe that Budweiser and Lil Baby was going for with their joint effort.

Sports enthusiasts from all around the world gathered for the 2018 FIFA World Cup four years ago, just as Lil Baby started his journey to popularity with the publication of his debut album. Now, the internationally renowned rap phenomenon from Atlanta is utilizing the FIFA World Cup and his association with Budweiser as a platform to reflect on his path and motivate followers to follow their dreams.

“My new track with Budweiser for the FIFA World Cup Qatar 2022 Soundtrack is a special one for me. It’s about the journey we’ve all been on over the last few years and celebrating what’s next. When I started in music in 2017, I went all in on a dream that brought me to where I am now, and that’s what I want fans to feel when they hear the song. I hope it makes you feel like you’re walking out onto the pitch at the World Cup making moves toward your own dreams, whatever that means to you,” said Lil Baby.

The World Is Yours To Take, one of only eight singles included for the Official FIFA World Cup Qatar 2022 Soundtrack, will be commemorated on Lil Baby’s 28th birthday with a live performance at the event. In addition to releasing fresh versions of the song, Budweiser and Lil Baby will collaborate with incredible artists from around the world to film the music video during the FIFA World Cup in Qatar, which will run from November 20 to December 18, 2022.