2018 will now include in its archive the twenty-fourth and final edition of Vans Warped Tour. Who better to discuss the significance of this with than its founder, Kevin Lyman. Thursday morning we were able to take 20 precious minutes between set-up in Virginia Beach and the opening of the gates to talk.

Starting from Warp’s birth, I asked Lyman if the tour had lived up to his original vision.
The original vision was actually to have a bunch of skateboarding friends and some friend’s bands and do this for one summer and then I’d probably go be a school teacher or something. So it has evolved and that’s what has allowed us to be around for 24 years. The vision took many forms and shapes since then and we just kept evolving. That’s why we’re still around.

We backed off some of the action sports we started with. Because those athletes started to have more success and more opportunities, we couldn’t get the top people. It was the same with the bands. Sometimes they got too big and couldn’t be on Warped Tour anymore so we got more involved in becoming a lifestyle fair that included music. Philanthropy became a big part of the tour and is now up there with the bands in some ways.

What do you see as the most impactful change that’s been made over the years?
Philanthropy. We are working with over 90 non-profits this summer and people are really motivated to be involved. All the organizations are having their best year ever. They are registering kids to vote, getting kids to take swabs so they are on the DNA list so they will be able to match with someone if they need help.

We’ve also re-sparked people to be interested in Warped again. It had not been a priority. This was a strong scene as the whole community supported it, but then as artists were put in different situations to make money by only touring because they were not making money on CDs, it put them in the situation that ‘maybe Warped Tour wasn’t quite the priority it once was for our scene’. That fed into the fans because if a band was touring within a week or two of Warped Tour, they’d say ‘well, I’m going to go see my favorite band and I’ll come to Warped Tour next year’. But by saying it’s the last year, it has made the tour a priority again. It’s really nice to see everyone show up in their old shirts, 2008 shirts…2015 and they’ve come to say goodbye to something. So it is important.

It was at this point that Kevin moved me to tears. Something no interviewee has ever done. I said as much to him which caused him to share the following:
The other day we were in Nashville. It was a really humid day…kind of oppressive. Then it rained. Then it got better…As I am standing out there a lot of kids walked by, shook my hand and said ‘thank you’. Then I turned around and had seven girls crying around me. At first, it made me nervous but then I asked why they were crying and they said ‘we became best friends on the Warped Tour’. Those things make you feel like the work you’ve put in over the last quarter century are worthwhile.

What is the one change you wish you had made but never did?
I was always investing in the future of music. I kept thinking about getting young kids out to these shows and to make it last for a long time. But in the last couple years, we didn’t see the younger end of our demo coming out. The people who’d been coming for years were still coming but, there was also societal changes happening. When you dug into it – technology. Kids just wanted to sit home and watch Netflix or their families felt safer if they just stayed in their bedrooms. Of course, we know that being in your bedroom with technology could be the most dangerous place on earth for kids. I’m thinking ‘Could I have just rode it out for 8-10 years just booking the old nostalgic type bands?’ I don’t’ know…I don’t think I would have changed a whole lot. It’s always been that backyard party. Agents would say ‘why don’t you go with a headliner that plays the amphitheater at the end of the night with lights and full production?’ I said ‘that wasn’t what the show was built on. Why would we change it?’ Maybe that kind of change would have…but we were fine. And when they said ticket sales were declining? We had one rough year and that was last year. We just didn’t see any kids coming out. But the irony is that it turned out kids just weren’t doing anything last year. Reports came out about the younger end of demo stating this. And that’s a warning sign to the music industry as a whole because we’ve always been the canary in the coal mine. If 14-17 are not going to the Warped Tour and 18-21-year-olds haven’t been to a concert, then it’s not in their DNA. 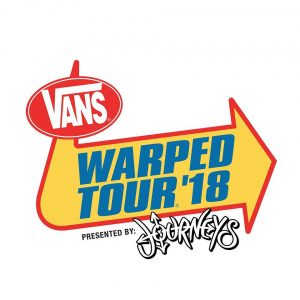 Now I turned to what I consider a very unique trait of Warped Tour — the family element. Fans, artists, and crew have met, proposed, married and had kids on the tour. Kevin is the dad of both of the extended Warped family and of his biological family who are also part of this traveling summer camp. I asked Kevin about being in the dad-role including knowing how many peoples’ success he was a part of.
I am writing out something for the end of the tour and the biggest thing I will miss is that camaraderie and sense of family. They all support each other. They accept new people every year and they say goodbye to a few people every year. And those people go out into the society and have done wonderful things. You look at the Warped crews that are out there working the major festivals. Saying you worked on Warped Tour is a great calling card when you’re job hunting because they know you will work hard. They know you have a good attitude and they know you won’t complain.

Are your biological family preparing for the break up this extended family?
They’ll all stay connected. My older daughter is already working on other festivals and events and she’s trying to figure out what she’s going to do next. My younger daughter still has to go back to college. She’s been working on Warped since she was 14. Now at 19, she will be going into the world with an experience that others wished they had.

Part of that Warped tradition has been community service. What was/is this year’s service project?
We did some river clean up in Ventura, CA on the first week of the tour. A lot of things got done early this year.

Longtime touring bands have told me that if they spend too much time off the road and are not in the studio they get restless and it can only be resolved by getting out on the road again…especially with the fact that you’ve accepted a position at USC and school will be out in the summers, have you anticipated that itch next summer?
No. The consulting firm will continue and we have more contracts than we know what to do with. We’re trying to weed through those and figure out what we’re going to do. But I also plan on taking my wife on our first vacation in 27 years. We travel all the time but we’ve never had a true vacation so we’re looking at getting a custom conversion van and traveling around western Canada next year.

We closed our conversation with some philosophizing…

We both know that there are many venues/theaters where artists have left notes for those who come after them on the bathroom walls. What note would you would leave for the veterans of the Warped Tour, especially those for whom the tour was the launchpad for careers that saw them on the Billboard charts?
Go out into the world and try to do great things through great music. Do some charity work while you’re on the road…not just playing and hanging out at the mall but great things.

And how about to the new kids who will only play this tour?
Go out and continue to use what you learned in these parking lots.