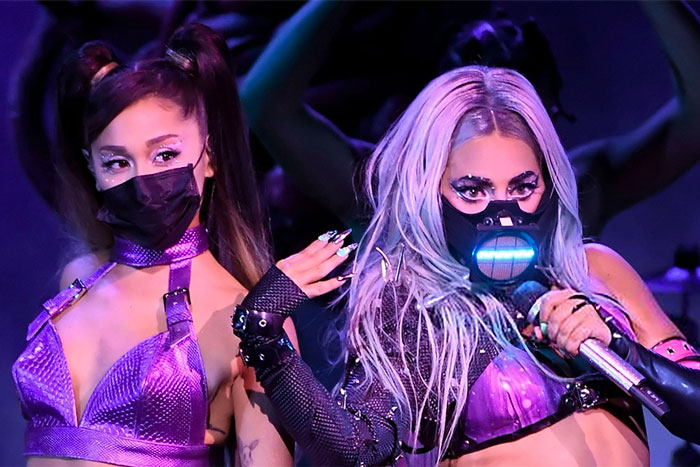 Lady Gaga reigned over the VMAs.

Eleven years after making her VMA debut, the singer-actress-philanthropist delivered a thrilling performance at Sunday’s show. Wearing a mask, she opened her 9-minute set while seated on her couch at home watching the 1999 VMAs before sliding down a pole and joining her masked dancers for “911.”

Ariana Grande then emerged with her dancers. Rocking sky-high platform heels and a mask, Ariana danced alongside Gaga before the pop powerhouses came together. Gaga then headed to her brain-shaped piano for a stripped-down rendition of “Stupid Love” before kicking it into high gear for the finale.

“Rain On Me” went home with three Moon People. “This is for us,” Gaga said while accepting the award for Best Collaboration. “We turned our tears that felt like endless rainfall into diamonds.”

Gaga also became the first recipient of the Tricon Award. “I wish for you to think, right now, of three things that define who you are, and take a moment to reward yourself for your bravery,” she said during her inspirational speech.

She also encouraged her fans to stay safe during the pandemic. “Wear a mask. It’s a sign of respect.”

How inspirational was @ladygaga‘s Tricon Award acceptance speech?! We are still in awe! #VMAs pic.twitter.com/XKoDxSJiEs