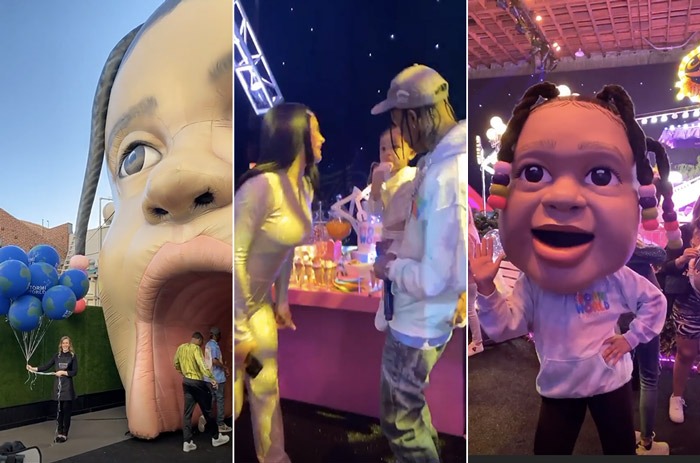 Two is better than one.

Kylie Jenner and Travis Scott spared no expense while celebrating their daughter Stormi’s 2nd birthday with a lavish amusement park-themed party on Saturday in L.A. Inspired by her dad’s own ASTROWORLD album, StormiWorld 2 was a sequel to last year’s first birthday bash, but even more lit.

Kylie took to Instagram Stories to offer a glimpse into the StormiWorld 2 festivities. Guests entered through a giant inflatable head of Stormi. Once inside, they were treated to three worlds—Trolls World, Frozen World, and, of course, StormiWorld.

Frozen World included ice sculptures and a Build a Snowman workshop, while giant trolls gave out hugs to their young fans in Trolls World. But StormiWorld was the main attraction—complete with a Dumbo ride, StormiWorld merch shop, tie-dye shirt station, taco stand, and a claw machine with Stormi prizes.

Travis held his daughter in his arms while Kylie and guests sang “Happy Birthday” before blowing out the candles on Stormi’s three-tiered cake. The proud dad also penned a heartfelt poem to his baby girl. “2 Is better than 1 2 might mean more to me than to u 2 things I do to live thru you 2 remember ever thing I do wit u 2 words I say before I leave from u Love u Dad,” wrote Travis alongside some adorable father-daughter photos.