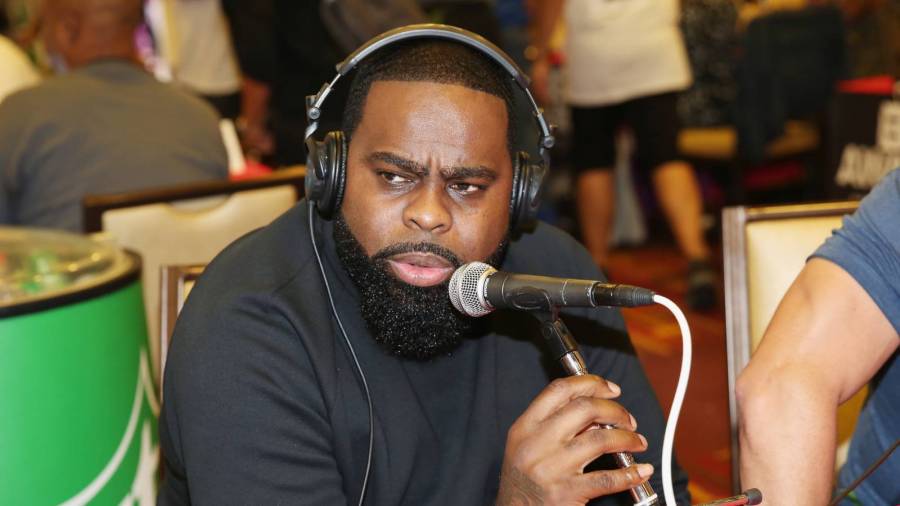 Slaughterhouse —  Joe Budden, Joell Ortiz, KXNG Crooked and Royce Da 5’9 — formed in 2008 and dropped two studio albums. Their self-titled debut arrived in 2009 and Welcome To: Our House was released three years later. In April 2018, KXNG Crooked announced via Instagram he was leaving Slaughterhouse but insisted there were no hard feelings about his departure, rather it was “all love.”

The Slaughterhouse name has been a topic of contention in recent weeks after Crooked and Ortiz announced a new project called The Rise And Fall Of Slaughterhouse, a follow-up to 2020’s H.A.R.D. EP. Both Royce and Budden immediately showed their disapproval of the project, with the podcast writing a simple “SMH” in Royce’s post about it.

During a recent episode of The Bootleg Kev Podcast, Crooked opened up about the group’s demise and argued Royce wasn’t being honest about what went down.

“Put yourself in the fans shoes for a minute,” he says in the clip. “You’ve been waiting on one of your favourite groups in the world to drop an album for 10 years. Now behind the scenes, I’ve been taking flights to New York, go talk to Paul Rosenberg. I’ve been taking flights to Detroit, talking to Em, talking to Royce, how can we put this back together? It’s not happened in 10 years. So you’re telling me you want me to wait again and then I saw something where Royce said that we weren’t waiting on anybody… that’s a lie.

“So I need to address all this stuff because whenever they say that I just come back with the truth. You can attack my character my integrity, you could try to assassinate it and say that I’m a liar and I’m doing this for money and all that shit.”

KXNG Crooked also suggested Budden was to blame for the hold up on new music from the group, explaining he was already signed to another label when Slaughterhouse got their deal with Shady Records.

“We started Slaughterhouse in the early days waiting on Joe [Budden],” he continued. “When we first got our deal with Shady, we had a song called ‘Session One’ on one of Em’s projects. He was trying to put the group on one of his projects. I think it was a bonus cut or something on the albums. So we did ‘Session One,’ and all the Slaughterhouse fans know Joe Budden isn’t on ‘Session One.’

“Joe was signed to another label and caught up in some paperwork. They called over to Shady like, ‘Hey we have him under contract, you have to get a clearance from us to have him appear on the song.’ All of us supposedly free agents to sign this deal with Shady, and come to find out Joe was on the paperwork, he said that they forged his signature and that wasn’t him. The group was put on the shelf for a minute while he was fighting amalgam digital label in court, and we were waiting on Joe because we couldn’t move forward, and that took months.”

Budden is certainly salty about the impending project from Crooked and Ortiz. During an hour-long argument captured on Instagram Live earlier this month, Budden remarked he wished nothing but the best for Ortiz. But when Ortiz asked him the check out the upcoming album, he snapped, “Joell, that album can suck my dick, are you kidding me? You want people to listen to this clown show?”

Ortiz fired back, “N-gga, suck MY dick! Don’t go there, don’t do that,” then abandoned the Live altogether. Budden and Royce are obviously opposed to the duo using the Slaughterhouse name, but it doesn’t look like that’s doing much to stop Ortiz and Crooked from moving forward. Check out Royce’s gripes below.