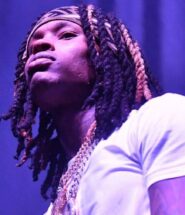 Since King Von’s November 2020 murder, his half-sister Kayla B often finds herself embroiled in all kinds of controversy and this month is proving to be no different. After clearing up Von’s relationship status earlier this week, fans started accusing her of being a little too invested in the late rapper’s personal life.

A quick deep dive into some of Kayla’s old tweets and suddenly she was facing allegations of incest. As one person tweeted, “King Von HALF sister KAYLA B act like she was fucking him … it’s creepy … she been dragging her brother name & business since he died! She really a fuckn NOOF! Ol goofy ASS girl!”

King Von HALF sister KAYLA B act like she was fucking him … it’s creepy … she been dragging her brother name & business since he died! She really a fuckn NOOF ! Ol goofy ASS girl!

As similar tweets continued to stack up, Kayla decided to do some damage control and hop on Instagram Live with some strong words for anyone accusing her of having an inappropriate relationship with her own brother.

“Get y’all sick nasty asses on,” she said. “Do I look like I’m from Down South? Me and my brother we from Chicago. We’re not from Down South where people fuck they brothers and sisters. All y’all that sayin’ that, I hope y’all grandma die ’cause that’s some nasty shit.

“I always knew Von was my fucking brother. Of course when my dad passed, we got separated. But come on, who the fuck finna forget they brothers and sisters? And if y’all were so-called Von fans, y’all wouldn’t be saying that shit.”

Some of Kayla’s tweets that were drudged up include, “Me & my new bae on FaceTime #KINGVON” and “Love of my life,” which led the rumors to spin out of control on Twitter.

Kayla recently met up with Cuban Doll after their social media war of words spilled off of Twitter. While it’s unclear what sparked the initial drama, Cuban accused Kayla of “snitching on her own blood” and reminded her of past assaults.

“You from 63rd bye,” Cuban wrote in since-deleted tweets. “You got beat up a day ago go recover! Yeen got no money to pay me so stop saying my name lil ugly ass hoe go get yo rematch from the girl who just beat you up. End of discussion.”

The two eventually met up on the night of January 13 and settled things with a fight. Footage of the brawl was posted to social media, which included lots of hair pulling and attempted blows to the face as people egged them on. Watch it below.