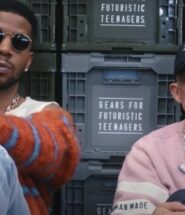 Kid Cudi is evidently plotting a limited edition collaboration with Bape. In a tweet on Wednesday (February 17), Cudi teased his upcoming collection with the Japanese streetwear brand while briefly immersing himself in the nostalgia of his meteoric rise that started with his hustle inside of Bape’s retail stores.

“My first full collection with my last 9 to 5!!!” Cudi wrote in a tweet containing photos of the collection.

My first full collection with my last 9 to 5!!! https://t.co/mxzSqcqMMq

The collection — which includes well over 10-pieces such as a signature camouflage print “Moon Man” t-shirt, a G-Shock watch and a hoodie featuring iconography from Bape-inspired Cudi’s cartoon character celebrity jeweler Ben Baller transformed into a $275,000 18K gold Gucci link chain with a pendant — will go on sale online and in store locations on Saturday (February 20).

For Cudi’s longtime fans, the upcoming collaboration with Bape is unsurprising considering the Cleveland native has explained multiple times he met Kanye West while working at one of the fashion giant’s retail stores in New York sometime between 2004 and 2008.

In 2019, Cudi also headlined Complexcon and appeared in a candid conversation with Bape founder Nigo and discussed the impact of the brand on his early rise to stardom.

Revisit the full conversation between Kid Cudi and Nigo below.