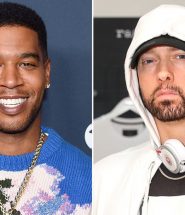 The Moon Man and Slim Shady are teaming up.

Kid Cudi has enlisted Eminem for his new single “The Adventures of Moon Man and Slim Shady,” which drops Friday. Cudi’s daughter Vada shared the big news with her father’s 2.3 million Twitter followers on Wednesday.

“I’m here to say that my daddy’s new single ‘The Adventures of Moon Man and Slim Shady’ is coming out on Friday. Check it out!” said Vada in the video clip.

And now a word from Princess Vada the chosen… pic.twitter.com/xmgIMkUntz

Cudi previously tried to reach out to the “Rap God” via social media in May. “@Eminem rap God. Help!” he tweeted.

Em said he was unaware that Cudi was trying to contact him when he spoke to Lil Wayne on Young Money Radio, but it appears that they finally connected.

Cudi previously dropped his hit “The Scotts” with Travis Scott, which debuted at No. 1 on the Billboard Hot 100. Prior to that, he released “Leader of the Delinquents,” his first solo release since 2016’s Passion, Pain & Demon Slayin’.

He is now readying his seventh studio album, Entergalactic, inspired by his upcoming adult animated music series for Netflix. He is teaming up with “Black-ish” creator Kenya Barris on the show.

He and Kanye West are also working on an animated series based off their Kids See Ghosts album. Last month, they shared a trailer for the Takashi Murakami-directed show.

Additionally, Cudi is set to appear in HBO’s coming-of-age series “We Are Who We Are,” which debuts in September.