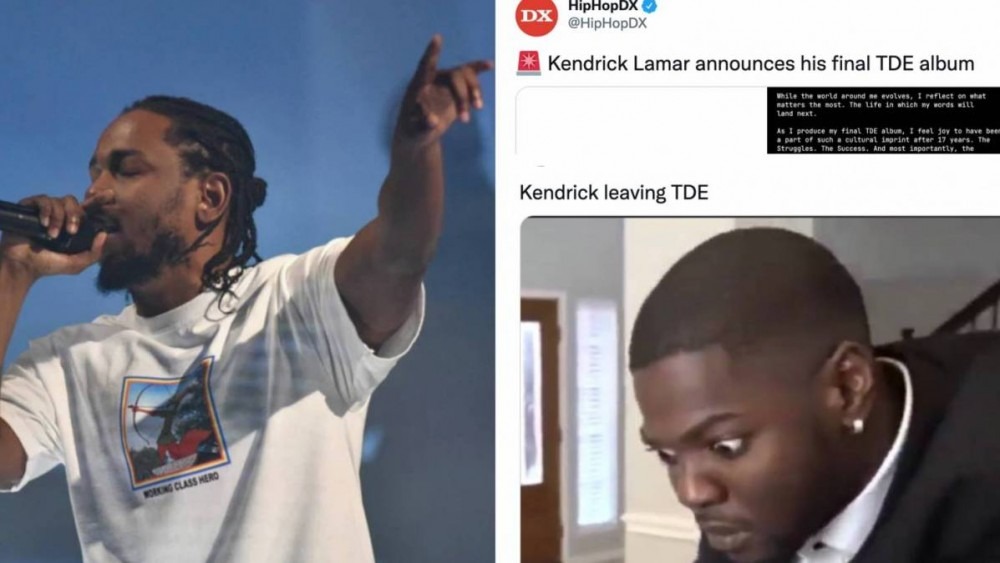 Anytime Kendrick Lamar drops anything it can be considered a bombshell announcement but the reclusive rap star truly threw his fans for a loop on Friday (August 20) when he disclosed the details about his last few months removed from the public eye.

Breaking his 2021 social media silence on Instagram, the Pulitzer Prize-winning MC not only admitted he wasn’t connected through the world via cell phone, he revealed his highly anticipated next album would be the last with his original label home of Top Dawg Entertainment.

“As I produce my final TDE album, I feel joy to have been a part of such a cultural imprint after 17 years,” Kendrick Lamar penned later in the post. “The Struggles. The Success. And most importantly, the Brotherhood. May the Most High continue to use Top Dawg as a vessel for candid creators. As I continue to pursue my life’s calling. There’s beauty in completion. And always faith in the unknown. Thank you for keeping me in your thoughts. I’ve prayed for you all. See you soon enough.”

Naturally, the lack of full explanation led to fan speculation of the highest order. And many fans were severely upset the announcement meant the already fleeting chance a Black Hippy album — the in-house supergroup between Dot, Jay Rock, ScHoolboy Q and Ab-Soul — likely wasn’t seeing the light of day.

Although no TDE member has spoken on the departure directly, TDE rapper REASON admitted the label was in flux during an October 2020 HipHopDX interview.

“I did that because even though the label’s going through a weird time, that we’re coming out of now, I still believe in this shit, and I’m still holding that flag,” REASON proclaimed while promoting his album, New Beginnings.

As of press time, several Kendrick Lamar-related topics have dominated Twitter’s trending topics, leaving fans in a tizzy over the TDE news.

HipHopDX will provide the latest information and details on Kendrick Lamar’s new album when made immediately available.

Check out some of the most passionate responses from the Kendrick Lamar frenzy below.

I won't speculate on why Kendrick might be leaving TDE, maybe it's an amicable thing, but I do think the label's scarcity mindset in regard to new releases has backfired by diminishing their artists' overall hype and popularity. Kanye has zoomers attention, TDE doesn't.

Wait this is Kdot's final TDE project? so no Black Hippy compilation ever ? Hectic.

Must be so much pressure for him on so many levels https://t.co/Iw0JFyoXQS

Just give us a black hippy track as a deluxe for the culture https://t.co/SM8dFY6M1n

Rip to a black hippy album 🥲

Awww Kendrick ,I hope u mean last album with TDE and not last album that you’ll ever make 😩…but sending love and blessings to the peace and serenity u embrace,whatever your next calling may be I hope it brings you joy and blessings 💕 pic.twitter.com/kQVWt8QRGX

personally i’m glad to see Kendrick moving on from TDE. it’s been a powerhouse force in recent years but it’s clear there’s been lots of creative differences bubbling to the surface lately pic.twitter.com/uQKC9RG4kQ

How Kendrick gonna drop his final album before a Black Hippy project pic.twitter.com/0dsObgBh77

I told people that Kendrick was leaving TDE, no one believed me 😭🤷🏽‍♂️

Kendrick just casually announcing his last TDE album is the most Kendrick thing to do lol https://t.co/EB06VVPIGm

I am distraught he leaving Black Hippy for Baby Keem

Kendrick: this is my last album with TDE

Everyone: KENDRICK IS RETIRING?????