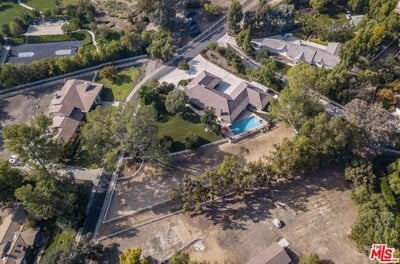 The new crib that Kanye West purchased across the street from Kim Kardashian won’t be standing for long. According to PEOPLE, Kanye plans to tear down the house and build a new one that fits his tastes.

“Kanye’s new house is a teardown. He only bought it for the location,” a source close to Kanye said. “It’s near Kim and the kids. He has a vision for the house and plans on starting construction ASAP.”

The New York Post notes Kanye purchases the property with the desire to have quicker access to his children. “It’s just simple logistics so that he is close to his children and has access to them at the drop of a hat,” the source said.

According to Dirt, the new crib reportedly cost $4.5 million, an extra $421,000 on the listing price. The new digs are very close to Kardashian’s estate and feature four bedrooms, 2.5 baths on 3,600 square feet.

Two months ago, Ye listed his $3.7 million home in the gated community after Kim K filed to declare single.

If you watched the Kanye and Drake live stream earlier this month, you saw Ye alter the words to “Runaway” to ask for Kim Kardashian back. According to Page Six, that effort will fall short. Very short.

Following the performance, Kim K filed papers to be legally declared single while they work through their divorce. A source close to Kardashian finds it weird and embarrassing that Ye is doing public displays for her despite living with his girlfriend.

“Kim is making a statement by doubling down that she’s single. She thinks it’s strange that Kanye keeps saying he wants her back, but all the while he’s got [Vinetria] at his Malibu house,” the source said to Page Six.

In the paperwork, Kim notes “irreconcilable differences have existed and continue to exist between [West] and me, which have caused our marriage to irretrievably break down. No counseling or reconciliation effort will be of any value at this time.…[West] and I both deserve the opportunity to build new lives. Therefore, I am asking that my request to bifurcate and terminate our marital status be granted.”