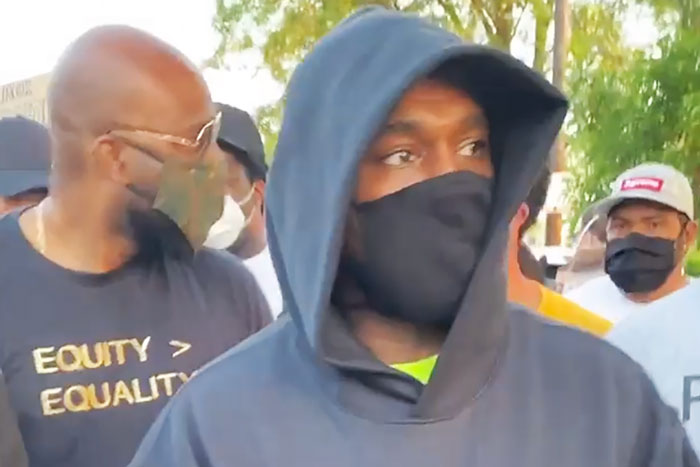 Kanye West is joining the fight for justice.

On Thursday, the rapper returned to his hometown of Chicago for a “Justice for George Floyd/CPD out of CPS” rally on the city’s South Side.

According to USA Today, Kanye called organizers with Good Kids Mad City and said he wanted to participate in a protest. Wearing a face mask and a black hoodie over his head, West kept a low profile as he marched with demonstrators.

At one point, the organizers of the rally became frustrated with the celebrity presence. Taylore Norwood grabbed a megaphone and told the crowd that she didn’t want a celebrity distracting from the movement.

“I would like to reiterate that this is a youth-led rally. This is not a celebrity pop-up,” said Norwood. “You will not hijack this rally from the people who organized it, point blank period.”

Taylore Norwood, 20, says that this Chicago march is a youth-led protest and that she doesn’t want a “celebrity” hijacking it. pic.twitter.com/uOTZapEc5x

West seemed to have heard the message and soon after departed as protesters continued their planned march to Chicago Police Department headquarters.

Earlier in the day, Kanye’s rep announced that he donated $2 million to support the families of Ahmaud Arbery, Breonna Taylor, and George Floyd. He has also offered to pay the legal fees for the Arbery and Taylor families. Additionally, he set up a college savings fund to cover tuition for Floyd’s 6-year-old daughter, Gianna.

Chicago’s own Vic Mensa was also on hand for the protests, and urged his city to defund the police. “Police are a symbol of brutality and that is what they’ve proven to us, to be the only thing they’re capable of, brutality, so we demand immediately that Chicago Public Schools cut ties with Chicago Police Department, unequivocally,” he said while speaking with WGN-TV.