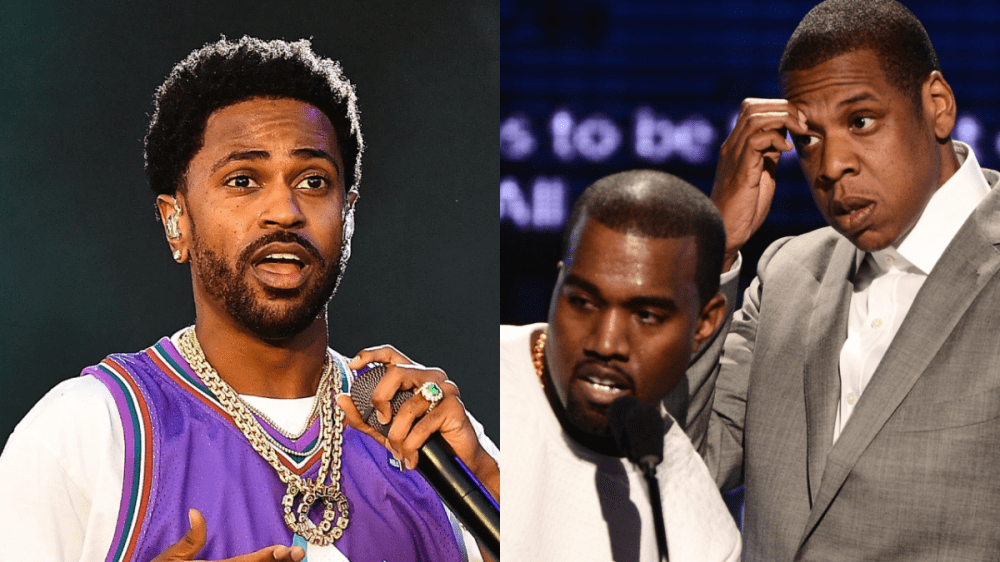 Kanye West is known for his strict studio rules. Long before he imposed a dress code for his Donda sessions, the G.O.O.D. Music founder famously ran a tight ship while crafting his 2010 magnum opus My Beautiful Dark Twisted Fantasy out in Hawaii, plastering the studio’s walls with signs that read, “No tweeting,” “No pictures” and “No hipster hats.”

Breaking such codes carries serious consequences. Just ask Big Sean, who was forced to fire one of his homies after he slipped-up during a MBDTF studio session with Kanye West, JAY-Z and Beyoncé.

In a clip from his Drink Champs interview with N.O.R.E. and DJ EFN that aired on Thursday (December 16), the Detroit rapper recalled his friend secretly snapping a photo of Sean, Ye, Hov and Bey in the studio and uploading it to social media. When word finally got back to Kanye and Jay, they ordered Sean to fire his friend on the spot.

“We down there working on My Beautiful Dark Twisted Fantasy in Hawaii,” he remembered. “I’m out there playing my role, but I brought my mans with me in case I needed anything, he was going to help hold me down … It’s good to have a support system, to have one of your homie’s there when you trying to contribute.

“So anyway, I’m in a studio — it was me, Ye and Hov. Even then, I wasn’t trying to be thirsty or sneak a fucking picture. I’m here just taking it in mentally. He ends up taking a picture of all of us in the studio. Didn’t tell me. He ends up tweeting it and it gets picked up on AllHipHop and things like that.”

When the leak came to Kanye West and JAY-Z‘s attention, they initially thought Big Sean was responsible. After he explained the situation, Ye and Hov pressured the G.O.O.D. Music rookie to cut his friend loose — and he had no choice but to follow orders.

“I don’t know who saw it, but it got to either Ye or Hov’s attention and they thought it was me!” he said. “It didn’t make any sense because I wasn’t even really on at that time and it was like, ‘Kanye, JAY-Z, Beyoncé, Big Sean.’ People were like, ‘Who the fuck is Big Sean?!’ It looked like I planted this shit.”

He continued, “When we talked about, I told them, ‘I don’t even know what the fuck you’re talking about.’ I explained to [Kanye] who it was and he was like, ‘You gotta fucking fire him. We’ve all done this, we’ve hired the people that we love. But people were mad at you thinking that you were being thirsty. And it was your mans.’

“So I told [my friend], ‘I’m in a position where it’s Ye and Hov saying you gotta go. I’m sorry bro, we gotta figure out something else.’”

Despite being fired at the behest of two of the greatest rappers of all time, Big Sean’s friend turned out just fine.

“But it ended up being a blessing in disguise,” he said. “He ended up transforming his life and being probably way more successful than he would’ve been in the position he was in. He ended up being a teacher and ended up impacting a lot of people’s lives and doing amazing, wonderful things.”

Sean Don did alright for himself, too, earning a spot on the My Beautiful Dark Twisted Fantasy bonus track “See Me Now” before solidifying himself as a star in his own right with projects such as Finally Famous, Dark Sky Paradise and last year’s Detroit 2.

“I love Kanye, bro. I love him for the opportunity he gave me and all these things,” he said. “But I thought what he said was some bitch-ass shit.” Sean also flung the cardboard tombstone that Kanye held up in his own Drink Champs interview while saying, “Fuck this shit. Fuck what he talking about!”