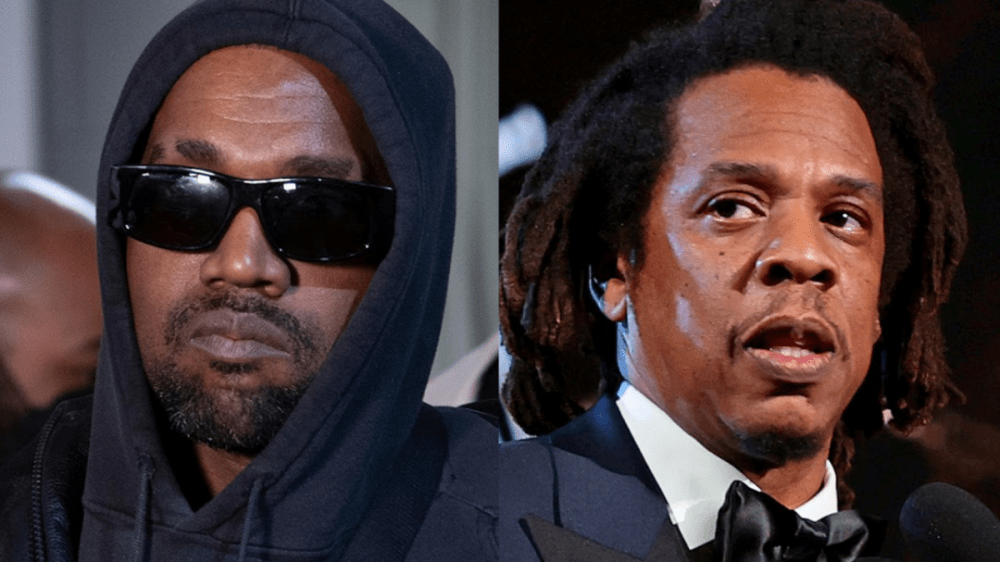 Kanye West reflected on the making of Watch the Throne during his appearance on Drink Champs with N.O.R.E. and DJ EFN on Thursday (November 4). The G.O.O.D. Music founder explained how he tried to get JAY-Z’s “Holy Grail” featuring Justin Timberlake on their collaborative album, but Hov was too “selfish” and wanted to keep it for Magna Carta Holy Grail.

“I took a track off of what was gonna be my album, the follow-up to [My Beautiful Dark Twisted Fantasy], that I heard when we all was at dinner, and it was the ‘Otis’ sample,” he began. “And I chopped it up and I was gonna go to Milan to do something in fashion and I was about to be late for the flight … ‘Cause I was like, ‘Yo, we not gonna lose this game. We not gonna lose this game no matter what. I’m gonna give you all this.’

“I took ‘New Day’ off of my next album, I took ‘Otis’ off of my next album. And we got into this big argument because he had this song called ‘Holy Grail’ that he had Justin Timberlake singing on. And I was like, ‘We need to put this on this album.’ And then he was like, ‘Nah.’ Everybody knows Jay is very selfish … We all love him but, you know, he’s very selfish. He’ll say like, ‘Man, I’m selfish.’ So he wouldn’t give that song. I’m like, ‘Man, how I’m giving all of this?’”

Kanye West clarified “Holy Grail” was never meant for Watch the Throne, but he wanted to make their collaborative album as strong as possible. Clearly, JAY-Z wasn’t on the same page.

“It was supposed to be on his album, and I said, ‘We need this ’cause we don’t need to be losing like how LeBron [James] and them just lost in this Championship,’” he explained. “I wanted to make the album better, he wanted to save [it for] his album. We fell out many of times, he’s my brother. Whenever he does some Jay shit and I do some Ye shit, we don’t say shit. That’s some real shit.”

Kanye West then spoke on JAY-Z, Kim Kardashian and his hometown of Chicago’s expections for him.

“He got mad about all that,” he said. “I’m like, ‘How I’m giving all this and you ain’t giving the equal amount?’ And I find that in life, period, like I love Jay so much, it’s like I love the city of Chicago so much, it was always like the same thing with Jay or Chicago – they always wanted it to be somebody more gangsta. They didn’t want it to be Ye.”

Watch the full interview below or skip to the 2:55:00 mark to hear Kanye West’s comments about JAY-Z.