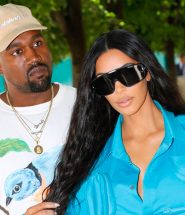 Kanye West and Kim Kardashian are trying to make it work.

The couple is reportedly hoping to save their marriage from divorce. Sources tell TMZ that Kim and Kanye have taken a private family vacation to try and work things out. Photos show Kanye and son Saint jumping on board a private plane in Wyoming Sunday. Their destination is unknown but they decided to take the trip when Kim visited Kanye last week.

Their relationship has been on the rocks as of late. Kim and Kanye haven’t seen much of each other for months and things took a turn following Kanye’s bizarre presidential rally and his Twitter rants, where he claimed that Kim cheated on him with Meek Mill. He has been spending time at his ranch and Kim has been taking care of their four children.

The two had an emotional reunion in Wyoming last week after Kim tried to get her husband treatment for his bipolar disorder. The family vacation will mark one of the first trips they’ve taken in a long time. They hadn’t spent much time together outside family birthdays and holidays.

Kim is “torn” over divorcing Kanye, but is hopeful they can keep their family together. “The last thing she wants is to be divorced with four kids,” a source tells PEOPLE. “She knows that she will be fine financially, but her concerns are the kids and the partnership. She is moving towards a divorce, but who knows if she will actually sign papers.”

The couple, who has been married for six years, had reportedly been discussing a split prior to Kanye’s Twitter meltdown. “She loves Kanye and she thinks of him as the love of her life,” adds the source. “But she doesn’t know what to do.”

Kanye seemingly wants to repair their relationship as well. He apologized to his wife on Twitter for his hurtful comments. “To Kim I want to say I know I hurt you. Please forgive me,” he tweeted. “Thank you for always being there for me.”